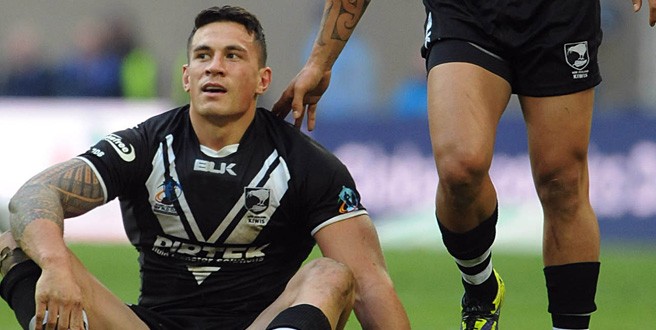 The pair are joined by Australian duo Cameron Smith and Cooper Cronk, New Zealand back rower Sonny Bill Williams and Scotland halfback Danny Brough.
Thurston (2011) and Smith (2007) are past winners of the award, and are bidding to join fellow countrymen Darren Lockyer and Andrew Johns in taking the prestigious title twice.

Brough would be the first player to win the Golden Boot after representing Scotland, while Williams, Burgess and Cronk are in contention after outstanding seasons at both club and international level.

The award will be decided by a panel of 13 judges including the likes of Brian Noble, Robbie Hunter-Paul, Andrew Voss, Daryl Halligan and the BBC’s Dave Woods.

Each will complete a voting process that also includes selecting a World XIII, with the results and the new Golden Boot winner revealed in Rugby League World in the February edition of the magazine, which will be available from Friday January 17.

“We feel that the shortlist accurately reflects the players that have made the biggest impact in 2013, primarily on the international scene, which is what the Golden Boot judges are asked to consider first and foremost,” Rugby League World editor Gareth Walker said.

“Each of those six players had outstanding World Cup campaigns and were vital in their side’s respective performances during the tournament.

“Further than that, each made a significant impact at domestic level during 2013, which will also be considered by the panel of judges.

“The Golden Boot has always been spoken of in the highest terms by players, who consider it the greatest personal accolade in Rugby League.

“You only have to look at the list of past winners to see how the award has recognised some of the greatest players to have graced the sport since 1984 – and we feel that any of the six nominees this year would sit comfortably among that group.”

Talk of who will win this year’s Golden Boot was high on the agenda of several players in the aftermath of November’s World Cup final at Old Trafford, with Australian fullback Billy Slater tipping his teammate Thurston as a favourite.

Burgess has also been touted by many following his performance in the semi-final defeat to New Zealand, which another former winner Garry Schofield described as the best by a player from this country in two decades.

But both face stern competition from the other four contenders, including Williams, who won the Rugby League International Federation International Player of the Year award, which was named before the recent World Cup final.

Brough has cleaned up with individual awards in Super League in 2013 – taking the Man of Steel, Albert Goldthorpe Medal and Rugby League Writers Association crowns after his sparkling performances for Huddersfield.

Similarly, Melbourne Storm scrum half Cronk won the Dally M Medal as the best player in the NRL in 2013 (Thurston was second), while Cameron Smith captained Queensland to an eighth straight State of Origin triumph and his country to the World Cup.

The 2014 Golden Boot shortlist in full:

Sonny Bill Williams
Returned to Rugby League for the 2013 campaign and had a huge impact. Played a significant part in Sydney Roosters’ NRL title success before featuring prominently for the Kiwis in their run to the World Cup final.

Cooper Cronk
Named the best player in the NRL when he was handed the coveted Dally M award for his performances for Melbourne Storm. Also a key member of the successful Queensland and Australian sides, scoring a try in the World Cup final at Old Trafford.

Sam Burgess
Enjoyed another huge season in the NRL, where he lined up alongside all three brothers for the first time for South Sydney. His performances then moved onto another level in the World Cup, where he led England from the front throughout.

Danny Brough
Scotland and Huddersfield halfback who has enjoyed the best season of his career, sweeping the board of individual honours in the northern hemisphere. Steered the Giants to the top of Super League before guiding the Bravehearts to a first ever World Cup quarter-final.

Johnathan Thurston
Man of the match in the World Cup final after another commanding display in the biggest of games. Was joint second in the Dally M awards following his performances for North Queensland Cowboys, and remained a vital cog in the dominant Maroons team during Origin.

Cameron Smith
Captain of Melbourne, Queensland and Australia in another year of remarkable consistency for the number nine. Led all three teams superbly while maintaining his own levels of consistency on the biggest of stages.