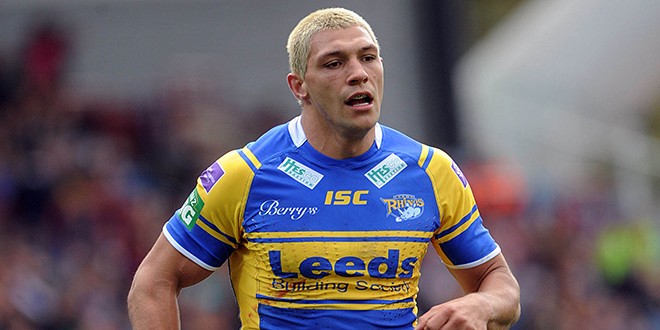 In a continuation of a new series, RYAN HALL, of Leeds Rhinos and England, tells JOE WHITLEY about his life off the field, including a shaving superstition and watching Ben Westwood and Sam Burgess wrestle… JW: What is the best meal you’ve ever had?
RH: I’m not sure. I like a good rare steak with peppercorn sauce. And sweet potato mash. And roast veg.

JW: What song do you listen to more than any other?
RH: Right now I am always playing The Best of Eva Cassidy. Yes, seriously. It helps get me off to sleep on a night. I’m also learning a new piano piece so I listen to that quite a lot to memorise it.

JW: Do you have any superstitions?
RH: I have a shave the day before every game. I let it grow out all week and then the day before a match I shave it all off. In the off-season I get a bit lost and end up with a beard.

JW: Which superpower would you most like to have?
RH: Flying, definitely. It’s the easiest way to get around. No fuel costs or driving.

JW: What is your favourite animal?
RH: I’ve swum with dolphins and like them. Monkeys might be my favourite though.

JW: What is your favourite colour?
RH: Blue. I’ve always liked it. I think it’s a boy thing. JW: It’s my round, what are you drinking?
RH: Vodka, lime and soda. After years of trial and error I’ve discovered these make me the least hungover.

JW: Dogs or cats?
RH: Dogs. We used to have two cats and they did my head in.

JW: Any bad habits?
RH: You don’t usually know if you have a bad habit unless someone tells you and no-one has told me. I will have some.

JW: What is your first thought on a morning?
RH: Normally my first thought is where am I? Especially over the last few weeks when I’ve been waking up in hotels across the country [for the World Cup].

JW: What was your first car like?
RH: It was a Rover 214 in British Racing Green. I had it given to me and it got stolen within two weeks.

JW: Do you have any hobbies?
RH: I’m a fair weather golfer but I’m not very good. I am very much into music – I play guitar and piano.

JW: Who is your favourite fictional character?
RH: Superman is cool. But so is Batman and he’s more real. JW: What did you do for your first job?
RH: The only thing I did before playing for Leeds was in the six-week holidays between school and college. I worked at Hesco in Leeds making military defences for Camp Bastian in Afghanistan. It was manual labour.

JW: What is your earliest memory?
RH: Crawling up some stairs. No idea where, probably in one of the first couple of houses I lived in.

JW: Best friend in the game
RH: Well four of us at Leeds had a carpool going at the moment. Carl Ablett, Ben Jones-Bishop and Paul McShane. I found myself spending a lot of time in a car with those three so they are up there.

JW: Greatest moment of your life
RH: Winning any of the various trophies.

JW: Which pro has the worst dress sense?
RH: [Without hesitation] Jamie Jones-Buchanan. He brings out some ridiculous stuff. He’s retro but in a bad way. I’ve seen him try to pull off a cowboy hat with purple chinos. JW: What do you want to do when you retire?
RH: My main motivation at the moment is that I’m really lazy, so I’m trying to do as much as I can now and when I retire I can just sit at home and watch TV.

JW: What do you hate more than anything?
RH: Being in a rush. I always leave things to the last minute.

JW: Funniest fellow pro
RH: Ben Westwood is a character, especially when he’s with Sam Burgess. When we’re at the pool [in England training] they do wrestling moves on each other. It always draws a crowd.