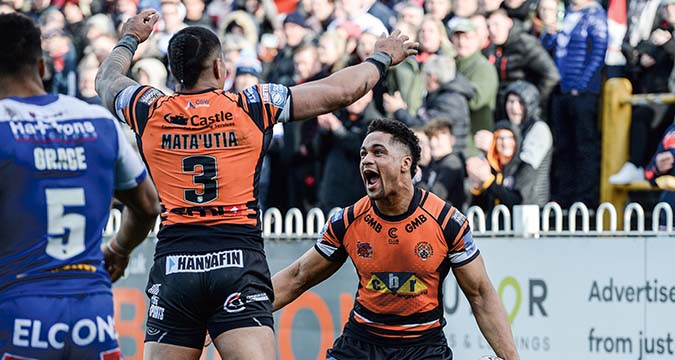 Castleford have seen a number of fringe players move on in the off-season. Junior Moors was a key member of the Tigers’ squad along with Matt Cook in the years of their success in and around 2017, with the two players having clocked up 109 and 110 Super League games respectively for the Tigers, but both have suffered from injuries, particularly in 2020. Both will now ply their trade in the Championship with Featherstone Rovers and Widnes Vikings respectively.

Mike McMeeken is the club’s biggest loss, having played 131 games for the Tigers, scoring 30 tries since joining the club in 2015. Still capable of pushing his way back into the England fold after featuring for the national side in 2017, McMeeken, who is still only 26, could still have his best years ahead of him as he joins Catalans Dragons in 2021.

Promising youngster Bailey Hodgson has left to take up a contract in the NRL with Newcastle Knights, while Jack Sanderson and Calum Turner join Championship sides Featherstone Rovers and Newcastle Thunder after making three and thirteen Super League appearances respectively.

The Tigers have responded to their losses, bringing in plenty of utility value for 2021.

Fullbacks Niall Evalds and Gareth O’Brien, the latter having been with the club on loan from Toronto last year, join the club as the star names. It remains to be seen just how coach Daryl Powell will utilise the pair, but Evalds being given squad number one suggests he will be the first-choice fullback in the early part of the season.

Elsewhere, Suaia Matagi and Jordan Turner have moved across West Yorkshire from Huddersfield Giants. Turner is a permanent signing, while Matagi is on a season-long loan.

Powell will be hoping that Matagi will add extra punch and depth to the Tigers’ pack, while Turner is joining his fifth Super League club, after stints with Salford, Hull FC, St Helens and Huddersfield, while he also spent the 2017 season in Australia with Canberra Raiders, and although he failed to force his way into their first-grade side he did appear for the World All Stars that year. Turner can play in various positions and brings big-game experience, having won a Grand Final with St Helens in 2014, to the Tigers.

Lewis Bienek is the final piece in Castleford’s jigsaw. The young forward joins from Hull FC after spending time on loan in the Championship with Batley Bulldogs.

Castleford’s spine will look to be more settled than it was last year. Injuries to both Jake Trueman and Danny Richardson forced Daryl Powell’s hand and led to plenty of chopping and changing in the spine, which halted the Tigers’ flow in the second half of last season.

Trueman suffered a back injury in a 10-0 defeat to St Helens in August and never fully recovered, making only ten Super League appearances all season, while Richardson was the victim of a shoulder charge against Hull FC in the Challenge Cup in September, although he eventually returned from an injured shoulder to make 14 Super League appearance.

Trueman and Richardson are given numbers 6 and 7 for the new season, with Jordan Turner and Gareth O’Brien providing utility cover.

Jordan Rankin started the season in the fullback position, but was released on compassionate grounds in May. He was replaced by Gareth O’Brien in August.

This season Niall Evalds looks set to start at fullback for his new club after snaring the squad number but O’Brien’s utility value will be vital for the Tigers and he will be ready to pounce in the case of injury or loss of form and he looks certain to be a good bench player at the start of the season.

Reigning Man of Steel Paul McShane completes the spine at hooker, having started every single Tigers’ game during 2020, although Adam Milner and Jacques O’Neill are able to fill in at hooker if necessary.

Castleford’s pack will be led by the invaluable Liam Watts, as it has been since he joined the club under a cloud from Hull FC in 2018.

Since then he’s turned his discipline around and established himself as one of the best prop forwards in the competition.

Watts turned 30 last August, while his front row partner is again likely to be Grant Millington, 34, who will be spending his tenth season with the Tigers in 2021.

The only change in the pack’s six squad numbers is the promotion of Cheyse Blair from last season’s number 18 to this season’s number 12, as he inherits the shirt worn last year by the departed Mike McMeeken.

The combination of Adam Milner and Nathan Massey is a good one at loose forward while Oliver Holmes will retain his place in the second row alongside Blair, who will make his transition from centre to back row a more permanent one this year.

Castleford’s backline is largely unchanged from last year. But then again, 2020’s star signing Sosaia Feki is still yet to make his Super League debut for the club, although he did play in a Challenge Cup game against Hull FC. He had a horrible year in 2020, with injuries plaguing him constantly.

Derrell Olpherts on the other hand had a decent start to his Tigers’ career, while the centre spots are filled by Peter Mata’utia and captain Michael Shenton, the latter now in the veteran stage at 34 years old. New boy Jordan Turner will provide plenty of competition in the centres with Cheyse Blair also able to fill in.

Both James Clare and Greg Eden give the Tigers added depth on the wings. Eden has not managed to replicate his amazing form of 2017 since then, but we know that he can score plenty of tries when given the chance. He just needs to keep a lid on the mistakes, while Clare has been a reliable squad member, having made eleven Super League appearances last season.

Castleford over the years have been famed for bringing youngsters through to their side and their squad is littered with players from their Academy. Most of them, however, are on the older side. The exception to the rule is Jacques O’Neill, who has successfully pushed his way close to the first 17, although Man of Steel Paul McShane is standing in his way in the hooking role.

Fellow young forward Lewis Peachey is yet to nail down a spot in the side, while Brad Martin, Sam Hall and Brad Graham have all debuted for the Tigers but have a long way to go to establish themselves in and around the first team.

Hooker Cain Robb is the sole member of the Tigers’ first-team squad yet to make his full debut for the club.

The Tigers will be aiming to get back into the play-off picture this year.

After a promising start last year pre-Covid, when they were joint top of the league after beating St Helens at home in March, the Tigers badly fell away to finish eighth in 2020. That was partly caused by a significant injury list, but that beginning to the season shows just what this squad could do if they can avoid the setbacks of 2020.

On the face of it they appear to have improved their squad, although the loss of Mike McMeeken is the club’s biggest setback, while some members of the squad are getting on the wrong side of 30.

The key will be how the spine performs and whether, in particular, Jake Trueman has overcome his injury problems and can combine effectively with Danny Richardson, which was a combination that looked so promising before the March lockdown last year.