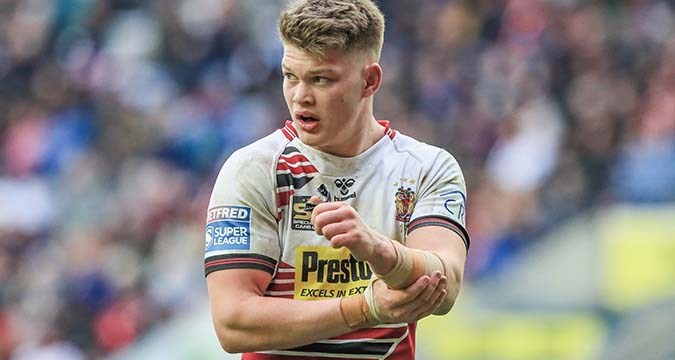 How do you replace an iconic captain who has played 403 Super League games for Wigan since making his debut in 2002?

We’ll come to that in a moment, but retiring captain Sean O’Loughlin is only one of a number of players from last season who won’t be at the DW Stadium in 2021.

Joe Burgess will head to Salford after 115 Super League games (and a stint in the NRL for Sydney Roosters and South Sydney in 2016, where he played 13 games) alongside Morgan Escaré and Jack Wells, who played 45 and 17 Super League games for Wigan respectively, with Escaré not getting a game in 2020 and Wells playing only twice.

The player whose departure was unplanned, however, was George Burgess, whose hip problem finally got the better of him last month and forced a retirement that will hopefully be temporary.

Fellow prop forwards Ben Flower, Joe Greenwood and Romain Navarrete all head to new pastures, and it’s probably fair to speculate that at least one of them would have been retained on the Wigan register if coach Adrian Lam could have anticipated George Burgess’ failure to recover from injury. Flower’s Wigan career covered nine seasons and, at the age of 33, he could still have done a job alongside some of the younger Wigan forwards.

The Warriors have also lost halfback Jake Shorrocks to Newcastle Thunder, while Amir Bourouh will head to Halifax Panthers for a full-season loan.

Of course the answer to the question posed in the last section is that the club re-signed one of its favourite sons in John Bateman, who returns to Wigan from Canberra Raiders after two seasons in the NRL.

Bateman made 118 Super League appearances for Wigan between 2014 and 2018, after having made his Super League debut for Bradford in 2011 and making 30 appearances in three seasons for Bulls, while he also made 34 appearances in two seasons in the NRL, reaching the Grand Final with them in 2019. And despite all that experience he is still only 27 years old.

A newcomer to Super League will be Jai Field from Parramatta Eels.

Brad Singleton joined the Warriors from Toronto Wolfpack in September on a three-year contract and played six Super League games for the club, appearing in the starting lineup in the Grand Final.

Wigan’s spine of Bevan French, Thomas Leuluai, Jackson Hastings and Sam Powell played a total of 68 out of a possible 76 games last season, representing a consistency that explains much of Wigan’s success in winning the League Leaders’ Shield and almost taking out the Super League trophy.

And all four of them will still be playing for Wigan in 2021.

But in 2021 they will be challenged, with Jai Field arriving to stake a claim for the stand-off spot, while Harry Smith, who has now turned 21, made five starting and nine bench appearance last season and will be hoping to claim a regular starting spot in 2021.

Then there is Joe Shorrocks, who had limited opportunities in 2020, but for both of them this could be a make-or-break year, while youngster Umyla Hanley carries a famous name and is still only 18 years old. But he looks like a natural replacement at fullback if Bevan French suffers an injury, even though Hanley played just one game in 2020.

There have been some changes in squad numbers for the members of Wigan’s pack, with only Sam Powell (9), Willie Isa (11) and Liam Farrell (12) retaining their squad numbers. Joe Bullock is promoted to number 10 to replace George Burgess, while John Bateman inherits Sean O’Loughlin’s number 13 and Brad Singleton gets the biggest promotion of all into the number 8 shirt, with previous incumbent Tony Clubb, who is now aged 33, dropping back to shirt number 17.

Oliver Partington (14 Super League starts in 2020), Morgan Smithies (four starts), Liam Byrne (seven starts) and Ethan Havard (fie starts) will also be battling for a starting spot in the Wigan pack and, despite the players heading out of the DW Stadium, the Wigan pack looks to be a strong and aggressive as ever, with the added bonus of having Bateman’s presence as the icing on the cake.

The Wigan threequarter line suggested by their squad numbers looks as strong as any in Super League, as long as they can avoid the injuries that have affected Dom Manfredi, Oliver Gildart and Liam Marshall in recent seasons.

Those three players only made 26 Super League starts between them last season. Zak Hardaker has moved into the number 3 shirt occupied by Chris Hankinson in 2020, while Marshall switches wings, moving into shirt number 5 after Joe Burgess’ move to Salford, with Dom Manfredi taking the number 2 shirt after wearing number 21 in 2020.

The Wigan squad also included Jake Bibby, who made 17 Super League starts in 2020, scoring a memorable try in the Grand Final, while Hankinson, although included in the squad list, has joined London Broncos on loan for the 2021 season.

Among younger players, Sam Halsall and James McDonnell both made their debuts against St Helens on 29 September last year, and they will both be looking for more opportunities in 2021.

Of the 32-man squad Wigan have named for the 2021 season, eleven of them were aged 21 or under at the start of the year, which is a strong indication of the strength of the club’s Academy system.

All of those players have made at least one appearance for the first team, with four of them – Morgan Smithies, Liam Byrne, Harry Smith and Ethan Havard – being allocated the squad numbers in the top 20 (excluding number 18, which is dedicated to Wigan fans). Those four players played 49 Super League games between them last season, with the other seven featuring far less frequently.

But we would all be well advised to watch out for Wigan’s new breed as they emerge to claim their places at the top table under their coach Adrian Lam.

Wigan start ever season just like their greatest rivals St Helens, in that they aim to win every trophy that they compete for.

Last season they won the League Leaders’ Shield, but were beaten on the final hooter in the Grand Final.

Their recruitment from outside the club has been limited for 2021 and coach Adrian Lam will no doubt be relying on some of his younger stars to come to the fore this season if the Warriors are to challenge once again for the game’s top honours.

But with John Bateman having stepped into Sean O’Loughlin’s shoes, let no one suppose that they can’t do it.