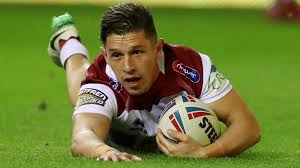 French international, Morgan Escaré, could not have guessed as he stepped onto the field for Wakefield Trinity, that the Friday 13th relegation showdown v London Broncos would prove so unlucky for him.

Escaré was on loan at Trinity from Wigan. Twelve months earlier he had been part of a Grand Final winning team. But a change of coach at his then club, Wigan Warriors, had left the 29-year-old full-back playing just six times more for the club, early in 2019, before heading for Wakefield on loan.

He was released from his Wigan contract in the June and after a month training with his new club, Salford Red Devils, returned to his native Perpignan to prepare for this season. Now Escaré – who burst onto the Super League scene with Catalans Dragons – is raring to go.

“It has been a very long last year for me,” he told the Daily Mirror.

“I didn’t play at all for Wigan but I was training every day before I left.

“When Shaun Wane was the coach I was playing every game and we won the Grand Final. Since then I have played about ten games in two years and that has been tough.

“It was very hard training every day, then going to the stadium when the weekend came just to watch the boys. I spoke to Adrian Lam about it and he told me I was training well, but that he preferred Zak Hardaker or Bevan French.

“It has made me hungrier,” he added. “I am very excited for the start of the season.”

So far Escaré is enjoying the move to Salford. He is one among several new arrivals at the club, where they are also welcoming new head coach, Richard Marshall, who takes over from last season’s successful Ian Watson.

Escaré has been handed the number one shirt but will take nothing for granted.