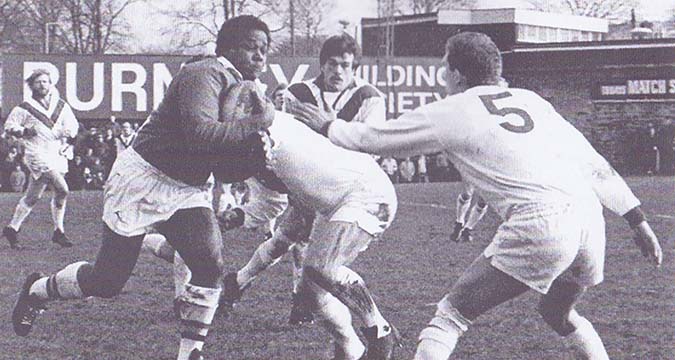 David Barends was one of many South Africans who was denied the chance to fulfil his potential because of the appalling apartheid regime.

Hailing from a village called Elim near Cape Town, Barends was a talented winger playing in his local rugby union competition, when he received a life-changing contract offer from Wakefield Trinity.

He arrived in England in December 1970, enjoying three years at Belle Vue, four at York and six at Bradford, and earning a place on the 1979 Lions Tour in the process.

He became the first foreigner to play for Great Britain via the residency rule, winning two caps against Australia. He wound down an eventful playing career with spells at Featherstone Rovers and Batley in 1983 and 1984.

The day when I represented Great Britain for the first time. Being a South African coloured, it was breaking new ground, but I didn’t feel any extra pressure. Playing internationally means everything, and of course I was denied that opportunity with South Africa. I was so proud to be chosen for the Lions and to play for Great Britain.

How far could you have gone in rugby union in South Africa had it not been for apartheid?

I was very fortunate to play for a team called Progress in the City and Suburban competition and also for Roslyn and then the South African Coloured team, but that was the limit of what I could achieve. Who knows how things would have been otherwise?

To be asked to come to England was such an honour and it was a completely different way of life – not just being in a new country but playing a new code of rugby. Rugby was very important in my village in South Africa, and it was the same when I came to Wakefield. My church was a big influence on me. I was brought up to trust and respect everyone, no matter their skin colour.

What was your family background?

I went to a church boarding school. My brother Ferdinand played fullback for Progress in Cape Town and he was like my guardian. He was my rock and he always looked after me. That made me free to do what I wanted to do – and that was scoring tries. People live for rugby in Cape Town and I have very happy memories of playing rugby back then.

When you look back, is it hard not to be resentful about apartheid?

No. I can’t be resentful because apartheid was what it was. My upbringing was through the church and to respect everybody, no matter their colour. Colour was no big thing to me – my grandmother was white. I was honoured to meet Mandela in 2000 in Johannesburg and I was given a Springbok blazer by him, which was wonderful.

How did the approach from Wakefield Trinity come about?

I was playing in Cape Town, and Ivor Dorrington, who had played for Wakefield, came over to me and said there was an opportunity with them and would I consider it. I was very happy to, and I arrived in England on 7th December 1970.

Is it true that when the Trinity officials met you at the airport they didn’t think you could speak English.

Yes, and they didn’t even ask! The chairman and secretary came to meet me at Heathrow, and we got on a train to Wakefield. They were talking to each other and assuming I couldn’t understand them. I just kept quiet. The chairman said to the secretary that he hoped I didn’t want a meal because they didn’t have much money on them. When the kitchen staff came around, I pointed to the best steak and I could hear them cursing. So I sat there eating a lovely fillet steak while they could only afford to have a sandwich each! When we got to Wakefield, someone came up to me and we had a chat. Suddenly, the chairman and secretary said, “Why didn’t you tell us you could speak English?” I said, “You didn’t ask!”

Where did you live?

I lived in Wakefield at first. Then I got married and we moved to Hemsworth. I’ve always loved living here. My wife and I worked together for a dentist. I was training to be a dental technician and was at Leeds University. The owner of the dental practice was the Chairman of Wakefield Trinity.

Did you encounter much racism?

If someone said something, I would reply in Afrikaans and they looked at me and then walked away. That was not a big thing for me. I was free to go where I wanted.

You scored two tries on debut against Blackpool six days after you arrived, playing outside Neil Fox. What are your memories of your time at Belle Vue?

Neil was the best centre I ever played with. He virtually gave me those two tries. He was such a good passer of the ball. All I had to do was run. I had so much respect for Neil. He would say, “Just run David!” and I did. But just as important as the rugby in those early days was adapting to life in England. Getting to know what England was about and talking to people were the most important things back then, and that’s how I remember my days at Wakefield. I loved English breakfasts too – bacon, sausage, egg! 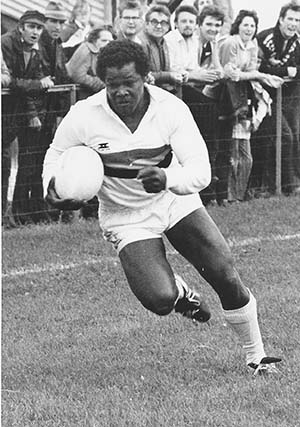 You then moved to York and later played for Bradford.

I was ready to move and was so pleased to go to York. It’s a beautiful city. I became the captain, and I enjoyed my time there. I was then scouted by Bradford and met Peter Fox, Neil’s brother. He came to my house and I said I’d been waiting for him. He is the best coach I’ve ever met. He was very direct and simple. He got his message through to every player and wanted us to express ourselves. We were successful at Bradford and it was so nice to win. Peter taught us how to win games and what we must have to do that. We knew it was war out there and we expressed ourselves, showed our skills and we had to earn the respect of the spectators who pay so much money. I loved playing at Odsal.

Was it a surprise to be selected for the 1979 Lions Tour?

I had no idea I would be selected. I was so pleased. It was such a shock. I didn’t think it would be possible because of my nationality. I can’t explain how it happened because I am a South African. I left that to other people. I was good enough to play, so that’s why I was picked. It was a good group of players and I enjoyed getting to know the other players. We didn’t do so well in the Ashes, but I was so grateful to win two caps. It also showed South Africa that it’s not about your colour, it’s about what you can do.

I had a try disallowed in the first Test because they said I bounced the ball when I dived. Australia carved us open in the middle and beat us 35-0. It was a different world. The problem with internationals is you are playing with players you didn’t know so well, and we didn’t have the capacity to beat the Australians. But I enjoyed being with the players as a group. It was the best opportunity of my life.

There tends to be a drinking culture on tours, not to mention in Rugby League in general. Did you struggle with that as a devout Christian and a teetotaller?

I can’t agree with you. The players were very sensible and only had a pint or two, but people will think what they want. The grounds were very hard out there, and we were used to English grounds. We were sliding all over the place. The players did their best, as did the coaches, and that’s all there was to it.

Your last two years came at Featherstone and then Batley. Were you sad to finish playing?

No, because I realised it was time for me to move on. I was working for the probation office and was more interested in my work. I was in the courts, dealing with people, liaising with the police. I represented black communities and went to London and all sorts of places to deal with racism. I learned that community is so important – white or black or in between, life is life. That’s what I was taught by my church, and by my parents, and in my village, but there are difficulties everywhere in the world. I was in transition. Sport was everything to me, but as I progressed in the probation office, it became a very interesting occupation, and it was great to be able to help.

Have you had any involvement in Rugby League since you finished playing?

I coached Upton open-age in the 1980s and they became the best amateur team. Upton is a mining community, so they were all from that background. Whatever we did, we did together. I remember a game with a side from Leeds and most of their players were black. Before the game, you could tell they were thinking they were certain to win. I told my players they could go home if they believed they’d already lost, or they could go and get changed and meet the opposition head on. We beat them and they didn’t even come in for a cup of tea!

Do you still watch Rugby League?

I will always watch Rugby League because the game gave me the opportunity to be who I am today. I will always be so grateful for that because the people in my village in my homeland are so proud of me.