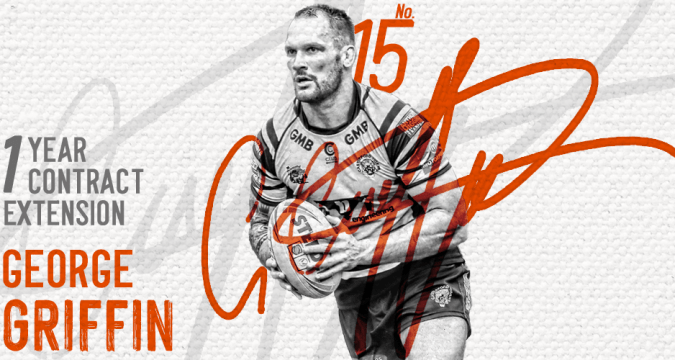 Castleford Tigers have triggered a one-year extension of George Griffin’s contract, keeping him at the club for the 2022 season.

Griffin joined the Tigers from Salford Red Devils fr the 2020 season and is in his second season with the club, having featured in 16 matches to date, and being set to make his 150th Super League appearance in his next top-flight match.

And Griffin, 28, is delighted to be staying with the Tigers.

“I’m over the moon, I am really happy here so to get my extra year is something I was looking forward to, pen to paper now so it’s sorted,” Griffin told castlefordtigers.com.

“The way the club is run, I get along really well with the boys here; it’s pretty local to all my family and I think I just fit into the mould of the club quite well and the way we play. Obviously, there will be a few changes to staff next year but that just brings another dynamic and a new challenge ahead.”

Griffin can play both at prop and in the second-row, and he appreciates his role as one of the workhorses of the side.

“I’ve never been the glamour player, but I work hard, and I think we have a lot of that here and that’s why we do pretty well. Massey and Macca (McShane) in the middle; we’re only going to build on that next year and hopefully play a lot with them and do something special.

“I think we complement each other well. I think we all work hard for each other and that’s the main thing if you can trust who is inside or outside of you then you go a long way as a team.”

In the meantime Griffin is hoping the club can win a trophy for their departing coach Daryl Powell.

“He’s been great with me Powelly (Daryl Powell), he’s brought on my game a lot and to send him off on a high note would be great,” he said.

Next season Griffin will be coached by Lee Radford, who coached George’s brother Josh during his time at Hull FC.

“I spoke to Josh, who gets along really well with him and he said he is a class act. I’ve only spoken to him briefly before, but he seems good, he’s obviously a good coach with his record, with a couple of Cups under his belt and I’m looking forward to working with him.”

Radford is excited by the prospect of working with George and the other Castleford stars.

“I’ve obviously had the pleasure of working with George’s brother for a while and have a good relationship with him,” said Radford.

“I’ve previously had an interest in George when I was at Hull and to finally be able to work with him, I’m really looking forward to that.

“A real solid player, up and down, and what you see is what you get.”