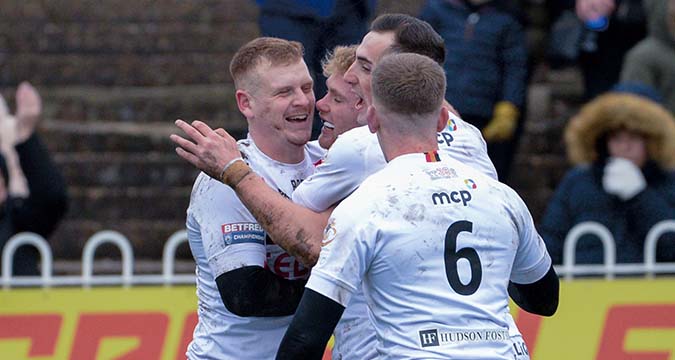 There haven’t been too many positive noises made about the possible autumn competition for Betfred Championship and League One clubs.

Last week club after club in both competitions lined up to announce, understandably, that they would not be taking part.

There wasn’t exactly a scramble to confirm other clubs that were keen to participate.

But that could be about the change.

Bradford Bulls formally confirmed they will take part, if there are sufficient numbers, having secured an all-important testing plan through the NHS.

And Dewsbury Rams and Batley Bulldogs are working together to try and confirm their inclusion along similar lines.

Mark Sawyer has a foot in both the Bradford and Dewsbury camps at present, having been given special dispensation to act as Bulls chief executive by the RFL while remaining Chairman of the Rams.

As such he has an insight into both clubs’ decision-making process.

“Firstly you need to come an agreement with your players,” Sawyer explained.

“Some might not want to play in what they see as friendlies; but the Bradford players had a meeting and the overwhelming majority wanted to take part, and John Kear agreed.

“What I should also say is that at Bradford there are some excellent backroom staff that have been dealing with Covid, including a Covid officer.

“Those kinds of positions can be filled very professionally, and that’s where the three clubs might have an advantage, because we are working as a team.

“If there are resources that we can share between the three clubs then we will.

“Kevin Nicholas at Batley is talking to the Council for a joint approach to testing with Dewsbury, and during very, very difficult times it helps to work together when we can.

“We won’t be working together on the pitch – everybody will be trying to win – but off it there are things we can do.

“Bradford has a testing process agreed with the National Health Service. It’s a robust testing system and it will allow the club to enter the competition if it takes place.

“If that happens, the priority will be given to Bradford season-ticket holders for home matches.
“Dewsbury are following the same process as Bradford.

“We’ve spoken to the head of service for testing in Kirklees; they are considering it and will come back to us.

“It will be a joint approach with Batley with a view to both clubs joining the tournament if we can get a testing procedure signed off.

“If you’re not able to do that then it leaves you with substantial costs that would make it very difficult.”

As such, Sawyer is not about to vilify the host of clubs that have decided not to participate for various reasons.

But he believes that clubs will have to face Covid issues at some stage, should the situation not improve as has been hoped, and that now is as good a time as any.

He added: “Absolutely I understand why clubs might not join.

“Some people are worn down by all the issues involved in working so hard just to keep their clubs going.

“But although there are costs there, we think it is worthwhile, and the way I look at it, we’re going to have to face up to this sooner or later.

“We may as well welcome the experience now and deal with it.

“Nobody knows what’s ahead of us – there are 101 questions and no answers.

“It’s an easy option to do nothing, but having consulted everybody at each of the clubs this is what we’ve decided to do.

“Whether the competition happens in the end only time will tell.”