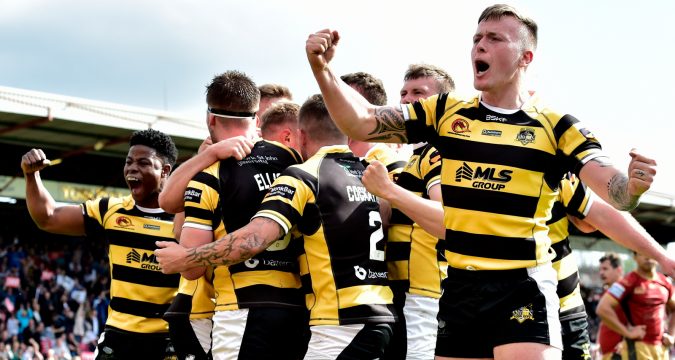 IF anybody doubted the potential and vibrancy that exists in Betfred League One, they should have attended Sunday’s Challenge Cup clash between York and Catalans.

The 3,081 present for an all-pay match with virtually no away support would shame a few Super League clubs, and was achieved on a fraction of their budget.

On the field, James Ford’s committed, expansive side gave the Dragons a terrific contest, were level just before half-time and only trailed by six points deep into the second half before eventually losing 34-22.

It was a terrific occasion and showcased exactly why clubs at that level deserve both attention and resources, as opposed to the cuts in funding proposed by the Wigan Chairman Ian Lenagan.

You couldn’t fail to be impressed by what you saw at Bootham Crescent. And the Knights are not on their own.
The obvious example in the third tier is Bradford Bulls, but the likes of Doncaster, Newcastle and Keighley are starting to achieve considerable things off the field.

Had Oldham not been beaten by Widnes in the 2001 NFP Grand Final, when they’d been cleared for promotion, who’s to say they couldn’t have achieved what a Salford, Wakefield or Huddersfield have since then, given those resources?

The Roughyeds could rise again, while Whitehaven have become the only League One team to make the last 16 of the Challenge Cup after accounting for Championship clubs Dewsbury and Rochdale.

After the Catalans match it was put to Ford what he would say to those who might disregard what goes on in the third tier.

“There are some really good players in League One, and good clubs,” he responded.

“You look at Bradford – and I know they get a little bit of stick – but they’re potentially an enormous club again.
“York has potential, as has Doncaster, and there are some really good coaches in League One as well.

“You look at some of the effort from people in part-time roles to promote the games and it’s fantastic.

“You often hear a lot of negatives in Rugby League, that the game’s dying and all that, but I don’t believe it for a second.

“This is the best League One has been for a long time, and it’s the same for the Championship.

“There are five full-time sides in the Championship. It certainly wasn’t that standard when I was playing in it, or I’d had all sorts of problems.

“Outside Super League the game is thriving and the more support we get the better we’ll get.”