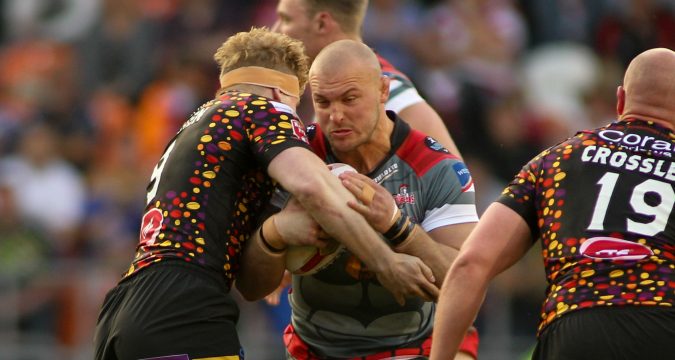 Leigh forward Jamie Acton has issued a public apology to the club’s supporters, staff, directors and sponsors after being suspended for the remainder of the season.

Acton was initially handed a nine-match suspension by an independent RFL disciplinary tribunal after being found guilty of a Grade F ‘other contrary behaviour charge’ arising from the recent Super League game against Catalans Dragons.

After the severity of the punishment was appealed by the Centurions, an independent tribunal dismissed the appeal and instead decided to increase Acton’s ban to a period suspension of four months, backdated to July 1st.

Acton said: “I am sorry to let everyone down. I accept full responsibility for my actions and they weren’t acceptable regardless of the grading I’ve been given. It is what it is.

“I will continue to work hard and improve on the negative areas of my game and support the team as best I can off the field for the rest of the season and whilst I’m part of the club.

“Thank you to everyone that is supporting us and backing the team, please turn up in numbers to support the lads for the rest of the season as it makes a massive difference.”

Leigh Centurions owner Derek Beaumont said: “Whilst Jamie’s actions are completely unacceptable in our game and cannot be defended in any way, I do not feel that the grading imposed was appropriate.

“We consulted a barrister familiar with these situations who also strongly believed that the grading was inappropriate.

“There were two cases that we viewed to support this one and we believed the nine match ban was excessive. We therefore exercised our right to appeal, again on the barrister’s advice. He was happy to attend on a cost-free basis should there not be a reduction.

“The risk of an increased ban was considered but with Jamie only available for the last regular game of the 8s it was considered a risk worth taking.

“People can make their own mind up and we have to accept the decision now for what it is and I would like to thank all those people offering their messages of support.

“Jamie is under no illusions of the consequences of his actions. He has worked hard on his discipline, in particular the fighting and retaliation aspect, which he has completely eradicated from his game.

“I am therefore satisfied that he will learn from this and we will work with him to eradicate the stupid and potentially dangerous aspects of his game so he can reach his potential of representing his country in the near future.”