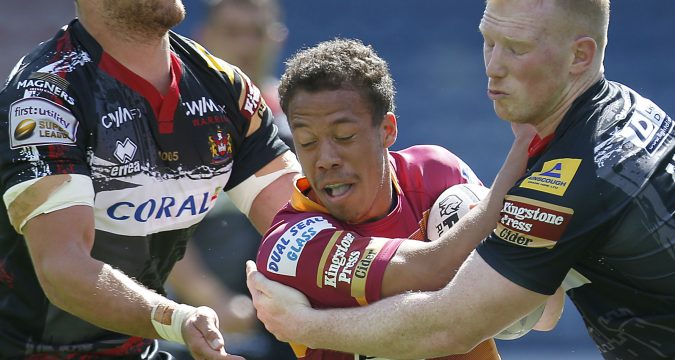 WHO SAW THIS COMING?!

The deadline has now passed, but at the last possible minute Hull Kinsgton Rovers have delivered on their word that new personnel could come through the door and snapped up Jack Logan from cross-city rivals Hull FC on loan.

“Jack is able to play in a few positions in the outside backs and has previous experience in Super League. He’s had a couple of setbacks but he’s back fit and available now and comes into the squad to provide extra cover,” Robins coach Tim Sheens said.

“We weren’t expecting to do any more business on the final day but we’ve managed to sort out a deal with Jack and Hull FC and we’re looking forward to having him on board. This now completes our squad going into the Qualifiers.”

Another deal over the line.

Coventry have snapped up Paul Emanuelli after he decided to leave South Wales Scorpions. He was player/assistant coach at the Scorpions but appears to have joined the Bears just as a player.

There’s the Halifax news. They’ve signed Wakefield’s Frazer Morris on loan for the remainder of the season. He’s the brother of Fax’s current prop, Elliot.

He made his debut for Wakefield last year but has found opportunities hard to come by this term.

We’re still expecting at least one more piece of business, and that is from Halifax.

Halifax have been successful in their attempts to do business. The capture of a player from a Super League club should be announced today.

While we wait, it appears another Hull FC youngster will leave that club.

Understand there could still be one more outgoing from Hull. Zeus Silk could join Ross Osbourne at York.

Received word there's still some hope a deal for Kalifa Faifai Loa can be completed today. He's been linked with a move to Huddersfield.

We’re into the final two hours of the deadline, but we’re still expecting some deals to be done… but what about Kalifa Faifai Loa?

Another signing has been completed in League 1…

Ross' thoughts on his new club will be online shortly. pic.twitter.com/VbuW89gUr8

There could yet be some movement at Hull Kingston Rovers.

Tim Sheens has refused to rule out any late activity at KCOM Craven Park.

“Not from overseas, but we are in negotiations with a couple of players from within the English system,” Sheens told the Hull Daily Mail.

“It’s guys who could add some depth into our positions but everyone is pulling players back rather than letting them go, and it’s getting a bit tight with the loans and dual-reg agreements.”

Some statement of intent from York City Knights.

They’ve now confirmed their second signing of the day is Jordan Cox, who joins the club on loan from Sheffield.

The prop will now be in League 1 with James Ford’s side despite reported interest from Bradford.

“I’m looking forward to getting out there playing for the club which I made my debut against in 2011 for Hull KR,” he said.

It’s not all glitz and glam on deadline day…

RL transfer deadline day not quite what it is in football. Just rang one Championship coach whose afternoon was watching Peppa Pig with son

It’s a busy day for the Knights!

News from Featherstone – and it’s an outgoing, as James Duckworth has signed up at Hunslet for the rest of the year.

BEST wishes to James Duckworth, who has joined @HunsletRLFC – on loan – until the end of the season. pic.twitter.com/vPNUudWAZS

We have news from Sheffield. Just outgoings expected. Jordan Cox was linked with a move away from the club a few weeks back in League Express but no word as of yet if it will be him.

Sheffield’s business is done. The only news today is of a player leaving the club. Jordan Cox has been linked with a move in @leagueexpress.

Hull FC have just let FIVE players go out on loan for the remainder of the season.

The most high-profile of those is Nick Rawsthorne, who has joined League 1 club Doncaster. He made a handful of appearances earlier this year and scored twice against Catalans. Brandon Westerman, Ryan Jones and Hakim Miloudi have also joined the Dons. They will link up with head coach Richard Horne, who is of course still a part of Hull’s coaching staff.

We won’t have to wait long for this one!

Rochdale have got in on the Deadline Day fun.

They’ve confirmed that Lee Mitchell, Dec Kay and Lewis Hatton have all joined the club on loan for the rest of the season from their dual-reg club Warrington Wolves.

“We are delighted to secure these three players until the end of the season at least,” Kilshaw commented.

“All three have been outstanding to us and it’s another example of the reserve sytsem working as these lads may have been lost to the game at the start of the season.”

Could Kalifa Faifai Loa be on his way to Super League?

A report in The Sun today suggests he has signed for Huddersfield Giants.

League Express reported last month that the Samoan international had been offered to clubs, with Widnes competing with one other club.

Rumours linking him with Toronto were wide of the mark, as reported on TotalRL last week.

Toronto Wolfpack have not signed Kalifa Faifai Loa, despite reports. He has been offered to clubs but he won’t be joining the Wolfpack.

But a deal could yet be completed today for the St George Illawarra man if the rumours are true.

Watson has just confirmed no Salford players will be available to the Championship club on dual-registration terms.

Halifax won’t have access to any Salford players for Qualifiers. Ian Watson just confirmed no Red Devils players heading to The Shay

No more activity to be expected from Salford before 2018.

Ian Watson has confirmed at the club’s press conference that they will not be making further recruits for the Super 8s after unveiling Tyrone McCarthy and Manu Vautvei.

When asked if recruitment was done, Watson side: “Yeah, 100 per cent, we’re done. It was key getting these two in – that was the most important thing. We don’t want to bring people in for the sake of it.”

Not the news Bradford were wanting. The club has yet to sort a visa out for Willie Tonga and it appears his future remains up in the air.

Update from Bradford – the Bulls are working hard behind the scenes to get things over the line but aren’t confident anything will get done.

London’s business ahead of the Qualifiers appears to be done.

Understand London are done transfer-wise. Happy with what they’ve got after Sam Wilde addition this week – they’re ready for the Qualifiers

Understand Halifax are still hopeful they can get some business done before the deadline today.

Dewsbury have completed the signing of former Oldham and Sheffield player Tommy Ashton on a deal until the end of the season.

He said: “My initial ambition is to get a run out with the lads and show people what I’m about. I want to help in the club’s quest to secure Championship rugby for next season, and continue our recent momentum. I believe that I can offer hard, direct running, with a little hint of flair, and I am looking forward to getting the chance to play in front of the Dewsbury fans.”

In case you missed it earlier this morning, Featherstone have missed out on the signings of Dane Nielsen and Ryan Hampshire after failing to finalise deals for the duo. We’ve got much more on the story – including reaction from Featherstone – right here.

Sheffield signed Liam Cooper, Jonah Cunningham and Calvin Wellington – but they will have to wait for their debuts after penning loan deals with the club. However, Jake Spedding is available after signing for the rest of the year – while the Eagles have also signed Jack Owens on a permanent deal.

Oldham have beaten the deadline to sign Huddersfield fullback Jared Simpson on loan for the rest of the season. The 21-year-old has featured three times already for Scott Naylor’s side on dual-registration but will now spend the remainder of the season in the Championship.

“Jared further strengthens the squad as we prepare for the Shield games,” said Oldham chairman Chris Hamilton. “He has been with us before so he knows all about our expectations and how we do things.”