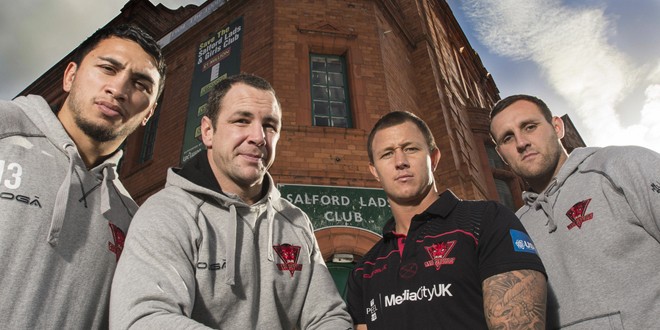 Despite being one of Rugby League’s most decorated players, Salford Red Devils captain Adrian Morley still has one more goal to aim for – to win the Tetley’s Challenge Cup with his hometown club.

Salford head for Hull FC this evening looking to book their place in the last 16 of Rugby League’s oldest and most prestigious knockout competition and Morley says the visitors will be in confident mood.

Morley was signed along with 13 other players in the off-season, and having won the Challenge Cup with Leeds Rhinos and Warrington Wolves, he says that to pull it off this year would be extra special.

“I think being at my hometown club definitely adds a different factor that I’ve never had before,” said Morley. “I’ve been fortunate to win it with Warrington and Leeds but to do it with Salford really would be special.

“There’s going to be a number of Super League clubs missing from the next round and it does give us all more of a chance knowing that there should be fewer obstacles in your way.

“The league is everyone’s bread and butter but the Cup is magical and a good run is what every team wants.

“It’s going to be a tough game. Hull beat us last week but I think we learnt a few lessons from that as we are doing all the time. Hopefully this time we will go into it better prepared.

“We won’t prepare for it any differently. The only difference is that there are no second chances with the club and it’s important to instil that message into the boys and we should see more of that desperation and desire to get through.”

Salford struggled to combine at first, with so many players thrown together in a short space of time, but Morley believes the squad is starting to realise its potential.

“I think we are starting to gel more now,” he said. “Even though we lost last week there were some really good signs there. No one predicted us to be world beaters from the start but progress is definitely being made.

“I’ve loved every minute of it so far. It’s been up and down with the results, but I’ve loved it.”

Pick up Rugby League World for an exclusive interview with Morley and his new Salford teammates. Out now!