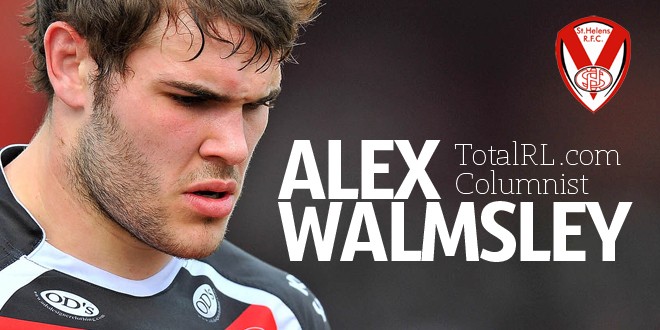 St Helens star Alex Walmsley, 23, has joined the Total Rugby League team as a columnist. Check back every Tuesday to read his thoughts on the game’s hot topics…

I am really happy with how the season has started, both from a personal point of view and for the team, but I am trying to keep my head down and just concentrate on my training. We don’t want to get carried away with ourselves – it’s alright having a good start but it’s not the business end of the season and we have to keep improving.

I scored my first try of the year against Hull KR on Friday. My overriding feeling was relief – not for any reason other than it means I don’t have to do the nuddy run at the end of the year, especially with what happened to Josh Perry a couple of years ago.

It’s a Rugby League tradition, if you play in the season and don’t score a try you’ve got to strip off and run down the street on mad Monday at the end of the season. I’m happy I don’t have to worry about that anymore.

Hull KR gave us a really good game, especially in the first half. I think we got a head of steam after the break and started completing our sets and showing a bit of class. We were drawing at half time and that shows how tough it was. Credit to Hull KR, considering how many players they’ve got missing, they stuck at it well. I think they’re a good team and they’ll definitely win more games than they lose this season, they’ve just had a tough start.

As a team we’re just trying to focus on the short term. We’ve been far from perfect – in our first two home games we’ve had bad first-half performances and were lucky not to lose against both Hull FC and Hull KR. We need to make sure we are not looking too far ahead because that’s when you get stung.

Fortunately we had good second half performances against both Hull teams otherwise there was a good chance we’d have lost those games. They were definitely wake-up calls and a reminder we need to be on our game every week. We are not unbeatable by a long shot so we need to keep training and making sure we are doing all the little things right.

I didn’t know that I’d been named as man of the match last week. I didn’t realise I was leading the Albert Goldthorpe medal standings either. It’s nice to have people talking about you, it’s really flattering and I’m humbled by it. But we’re only four games into the season. I know as well as anyone I am far from the finished article. I’ve got lots to learn still, it’s nice to win man of the match but it means nothing if you have a shocker the week after.
I’ve been recognised a few times in St Helens recently, which is really weird. Though I suppose being 6ft 5in and 18 stone makes me easy to point out. It’s something I’m still getting used to. It’s nice to have a chat with the fans, I’m always happy to speak to them. They’re the backbone of the sport so it’s the least you can do. Someone I was chatting with the other day told me I run like a girl. We were having a bit of a laugh and obviously that’s something I’m going to be working on this week!
It isn’t hard to keep your feet on the ground when things like this are happening, especially when you’re in a team sport. If you don’t keep yourself grounded, your team-mates will certainly do that for you. As much as they all want you to do well, there’s always banter flying around when you get interviewed in a newspaper or on TV. Jordan Turner and Adam Swift love to take the mick in training. They’ll pick up on your interview and mock you for a couple of hours. If I say something wrong I know I’m going to get hammered at training so it’s quite easy not to get carried away really.

Last Friday, in our very first set, I knocked on and Luke Walsh went absolutely mental at me. For a good 30 seconds, I reckon, he absolutely bollo**ed me. Obviously he’s my half back so I can’t really say much, I was just saying sorry. Then when we got the ball back Walshy knocked on and I said “one all”. He tried not to make eye contact, which was quite funny.

That’s his role though – he’s a leader on the park and sometimes you need to get in your players’ faces and he’s good at that, but he’s a great leader, he’s good off the field as well, a really nice lad. The way we play is all constructed from how he plays, so he will speak to us how he wants us to run off the ball and how to attack then he can do the stuff we know he can. He’s a very special player.

The return of Mose Masoe

It was great to see another of our new signings making his debut last week, Mose Masoe. He’s been injured since the World Cup and he got the biggest reception of the night by a long way. He did alright to be fair, he hasn’t played since November and he’s missed pre-season so he’s only just back in training. For him to come back and do about half an hour was really good for a big lad. It’s good to have him in the team and obviously he’s only going to get better.

I think I’ve got about two inches on him height-wise but he’s about six stone heavier than me! He’s a big boy, he’s got hands like dustbin lids. He’s been hyped up a bit and I know he’s really looking forward to living up to that hype and I 100 per cent think he will. He’s very committed, he’s absolutely flogged himself the last few weeks.
His return is going to make it more competitive for us props but that’s what you want, it’s not just with Mose, there’s competition throughout the team, Kyle Amor, who’s had a great start to the season, Louie McCarthy Scarsbrook, who’s a great player, and Anthony Laffracnhi, and there’s a load of younger lads too, Greg Richards, Anthony Walker, Luke Thompson. You can never think your place is safe. It’s great to have competition, it spurs you on and training is a lot more intense.

It’s good to see some of my fellow ex-Championship players doing well in Super League. I’m really happy for Jason Walton, he had a chance at Super League when he was younger and it didn’t quite work out for him so he’s been in the Championship working hard. He’s been rewarded with a contract at Salford and, whenever I watch him, he’s been one of their better players, along with Greg Johnson who I played with a few times last year when I went back to Batley on dual registration.

There’s Liam Finn as well, who has made the step up seamlessly, and Anthony England at Warrington. He’s a big lad, a good friend of mine, and I know he will do well. I’m really happy that there are clubs dipping into the Championship and not seeing it as a lost cause. This proves there’s a lot of quality players there.
My brother plays in the Championship for Featherstone and he’s just had a set-back with an injury he was recovering from. He broke his arm in pre-season and unfortunately it hasn’t knitted correctly so he’s had to have that operated on. I’m gutted for him, he had a good pre-season and I know he was looking forward to his new challenge at the Rovers.

On our captain’s run, the last training session before match day, the backs and forwards split up. The backs go off and practise their kicking and what not and the forwards, led by Keiron Cunningham, play ‘Razzle Dazzle’, which is basically walking touch and pass. You’re not allowed to run unless you call ‘boost’, and you can only call it once every set. It’s pretty intense, probably as intense as the game itself.

Keiron takes the over 26s and they always play the younger lads, so whatever forwards are left play against the older boys. It’s fiercely competitive. So far this season it’s 3-1 to the over 26s, and I’m not happy about it. There’s always a few bust ups because emotions run high but it’s good fun. Obviously you want to enjoy your training and it’s a good way for us forwards to do that. I don’t like to name names but I’m one of those who probably gets a bit too emotional. Especially because the over 26s – Cunningham in particular – love to cheat. They have more players than us as it is so for them to cheat as well is really frustrating.

Sometimes I have to pinch myself when I look at the players I’m lining up alongside and against. When we play Leeds – I’ve supported the Rhinos from a young age – I’m facing Jamie Peacock, Danny McGuire, Kevin Sinfield, Rob Burrow. It’s a great honour and I feel blessed to be on the same pitch as them. It’s not just Leeds, all of Super League. It’s pretty surreal but I’m happy I’m here and competing with the best.

If you watched our game against Salford on TV you will have seen Adrian Morley swing for me as he was getting up from a tackle. I am really happy he missed. Rugby League is an emotional game so I didn’t take it personally, it’s part and parcel of the sport. You have a laugh about it later and to be fair he tapped me on the back straight after. It will definitely make it more interesting the next time we play Salford.

Looking ahead to this weekend

You never kick a dog when it’s down and we are definitely looking at Friday’s match against Catalan Dragons like that. They haven’t had the best of starts but they’ve got some physical players and they will be no walkover.
They’ll be wanting to hit back from a disappointing result against Wakefield and it will be us they’re trying to hit back at. It’s going to be a tough game and we are not taking it lightly. We’re going to try take last week’s second half into the game and get another win.

Finally, I noticed that my team-mate Louie McCarthy-Scarsbrook slated me in an interview with this website recently. Louie likes to think he’s a bit of a comedian but the truth is we only laugh at him in training because he’s the loudest. They’re more sympathetic laughs, because he’s clearly a little special. He’s a good lad though and I’m sure if he keeps working on his material, he might be able to make us laugh properly one day.