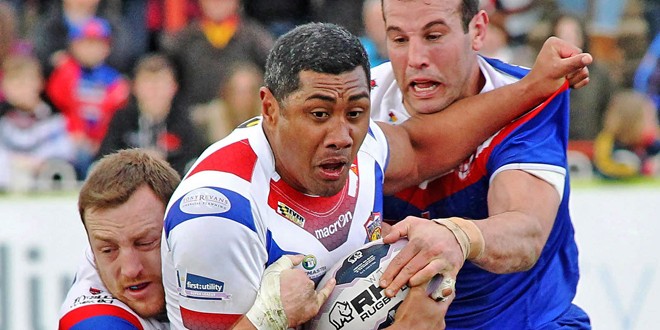 Super League legend Ali Lauitiiti will play on for another year – but it won’t be in England, it will be in the NRL.

Lauitiiti has signed a deal to return to former club New Zealand Warriors, the club with which his professional career began.

Recruitment and development manager Tony Iro confirmed the iconic back rower has signed a one-year second-tier contract opening the way for him to return to the Warriors and Auckland in 2016.

Lauitiiti spent eight seasons with Leeds Rhinos before another four with Wakefield in Super League.

“For Ali this is a chance to come back to where it all began,” said Iro.

“With his depth of experience he has so much to offer us as a leader and mentor both on and off the field.

“In realigning our squad our goal was to retain and recruit quality players while also ensuring we had a strong blend of experience throughout the wider group.

“While Ali is 36 now we saw he still has his range of skills when he played for Leeds against the Kiwis a few weeks ago.”

Iro stressed Lauitiiti had been secured on a lower second-tier contract, not as a top 25 player.

The man once dubbed the ‘Michael Jordan of Rugby League’ was thrilled about the prospect of returning to Mount Smart Stadium after leaving the club in 2004.

The Auckland-born Mangere East Hawks junior wound up his playing time in England with a testimonial season at Wakefield before making his guest appearance against the Kiwis last month.

“As a family we’re excited about heading home after being away so long,” he said from Leeds.

“For me it couldn’t be better being given this chance to come back to the Warriors. I left a long time ago but the club has always been really special to me.

“While I’ve kept training I’ll have some catching up to do once I join the boys for training but I want to do all I can to help the coaching staff, the team and the club in any way I can.”

Warriors head coach Andrew McFadden welcomed the prospect of having one of the club’s most popular players back in the fold.

“Ali has been an unbelievable player over so many years, which I saw first-hand while I was still playing,” he said.

“Having more experience in our group is so important as we prepare for 2016 and beyond. A player like Ali will add so much with his knowledge and his leadership.”

Lauitiiti went on to play 115 games – scoring 33 tries – for the Warriors before signing for Leeds in 2004.

He quickly achieved legendary status with the Rhinos where he was a winner five times in six Super League grand finals and also helped Leeds to two World Club Challenge victories in 2005 and 2008.

Lauitiiti has scored more than 100 tries in 400-plus games for the Warriors, Leeds and Wakefield.