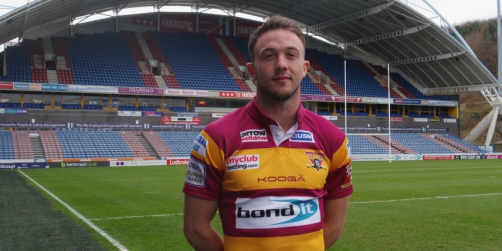 Huddersfield Giants coach Paul Anderson admits he’s been encouraged by what he’s seen from new signing Ryan Brierley thus far – as he prepares to potentially hand him his Super League debut on Friday.

Brierley is in the Giants’ 19-man squad to face Wakefield on Good Friday, meaning he could play for the club less than a week after his arrival from Championship side Leigh Centurions.

And Anderson, speaking at his weekly press conference, says he’s liked what he’s seen from Brierley on the training field thus far.

“He’s obviously only just joined us, but in the short time he’s been here we’ve all seen how skillful and how quick he is,” he said.

“He also looks a good organiser, which means all of the initial signs are very encouraging indeed.”

Brierley is joined in the Giants’ squad by prop Craig Huby, who is yet to feature this season.

Huby has not played in 2016 after suffering a broken hand in pre-season – but Anderson has been handed another timely boost with the return to fitness of the former Castleford man.

“Getting Craig back is very timely,” said Anderson. “He’s a very experienced player, a good talker and a good leader, and you can sense how much he’s looking forward to getting back out there.