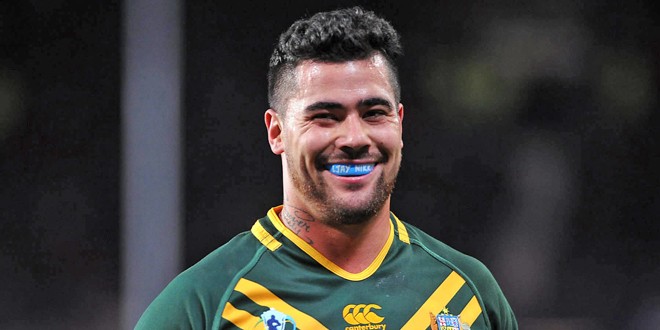 Cronulla star Andrew Fifita has confirmed he will join Canterbury Bulldogs on a four-year deal at the end of 2014.

The Australian test prop, 24, told his team-mates of the move after Monday’s loss to Gold Coast Titans and is said to have broken down in tears. He was made a multi-million dollar, four-year offer by the rich Bulldogs and said it was too good to refuse. He is now set to link up with former St Helens forward James Graham, forging one of the best front-row partnerships in club Rugby League.

“I wasn’t the smartest kid in school and if it can help me get a start in life and get a house over my family’s head, I’m more than happy to help them out,” Fifita told the Seven Network in Australia.

“I told them [his team-mates] I didn’t want to leave but, at the end of the day, I’m looking to the future. But 2014 I’m a Sharks man, if Sharks fans have trust in me, I’m going to go out with a bang.

“They haven’t won a premiership and I just want you all out there to follow me and I’ll give it 100 per cent.”

The move ramps up speculation that Graham could be replacing Sam Burgess at South Sydney Rabbitohs.