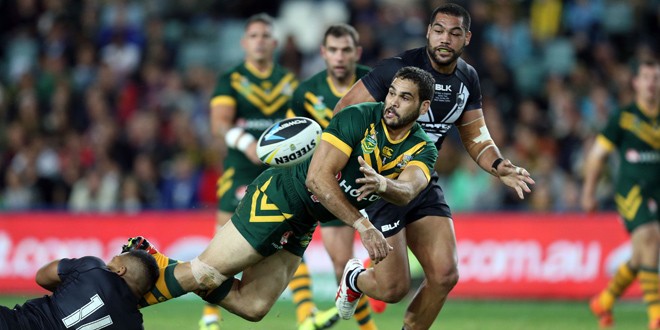 In a nutshell
Australia came from behind to overpower a valiant Kiwi side and win the Anzac Test.


How it unfolded
6’ – Jess Bromwich forces his way over after a great start from the Kiwis. Shaun Johnson’s kicking game has peppered Billy Slater in the early stages and New Zealand definitely deserve this score. From a few metres left of the sticks, Shaun Johnson adds the extras: 0-6

12’ – Greg Bird hits back after a gorgeous Johnathan Thurston pass opens up a massive gap for the back-rower. Thurston then adds the extras to equalise: 6-6

18’ – Brett Morris finishes a superb move in the right corner after decoy runners create an enticing overlap. Thurston lands one from the touchline: 12-6

23’ – Tohu Harris gets New Zealand back on level terms, finishing off a clever move but relying on the video referee to confirm his borderline grounding. Johnson’s conversion levels matters: 12-12

27’ – Sam Moa forces his way through the heart of the Kangaroos defence thanks to a tasty inside ball from debut hooker Siliva Havili, who has less than five first-grade NRL appearances. Johnson slots the conversion: 12-18

54’ – Australia take advantage of consecutive sets that come from a Jesse Bromwich penalty and a long Billy Slater pass puts in Brett Morris for his second of the night. Thurston levels the scores: 18-18

62’ – Billy Slater links up with Greg Inglis in fine style to put the Aussies in front. Another inside ball gives Inglis a gap and the centre races through to score his 23rd test try. Thurston adds the extras: 18-24

73’ – Josh Morris races into space and find Cooper Cronk in support, who goes over to put the Kangaroos out of reach. Thurston successful with the conversion: 18-30