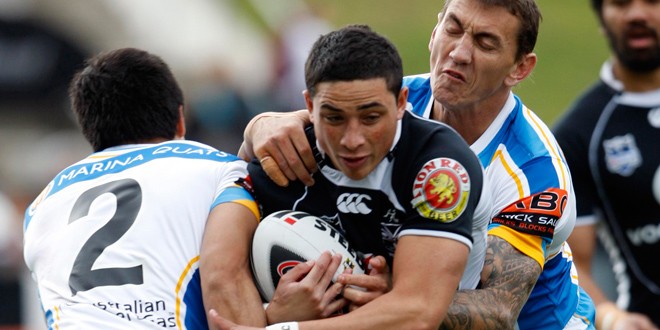 The 25-year-old, considered one of the best full-backs in the NRL, has been playing second-tier football in 2014 since the arrival of England star Sam Tomkins meant he was asked to play out of position.

Koukash wrote on Twitter (sic): “Finally, we found the key to the Locke. We have signed Kevin. The second exiting signing for 2015 in 24 hours.” The contract is said to be three years in length and Locke is expected to link up with his new team-mates in October.

In an official statement posted on the official Red Devils website, Koukash said: “Kevin Locke is one of the most exciting talents in the game, not only that but we have taken him from the NRL – something people kept telling me couldn’t be done.

“This signing proves that we will be competitive at the very top of the sport. I have always made my intention clear that we will work tirelessly to make the Red Devils a household name in this country and beyond and signings of this calibre – along with the other names we already have at the Club and in the pipeline will begin to make this a reality.

“Kevin is one of two major signings we have made for 2015 this week and we will be releasing more information on the other later in the season.

“We already have the makings of a very good squad here at the AJ Bell Stadium and when it became clear that Kevin was interested in our vision it was obvious we would want him to play a major part in it going forward. I would like to thank Wayne Scurrah, Chief Executive at the New Zealand Warriors, for alerting me to the opportunity to make a signing of this magnitude.”

Red Devils Head Coach Iestyn Harris added: “There is no doubt in my mind that next year we will have the most exciting full-back in the competition. Anybody who has seen Kevin play will have seen how fast he is but his game is more than raw pace, he is a class act and he will light up Super League for at least the next three seasons, of that I am sure.”

Koukash also tweeted a link to one of Locke’s video showreels, which can be found below.