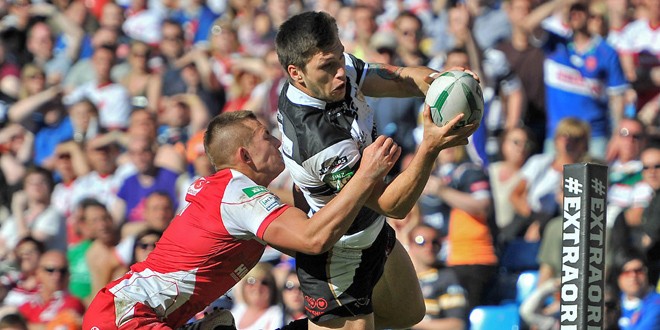 Martyn Sadler looks forward to what he hopes will be a sparkling weekend of Rugby League action at the Etihad Stadium in Manchester.

This is an amended version of his ‘Talking Rugby League’ in this week’s issue of League Express, which is still available in the shops, or can be bought digitally here.

It looks as though the weather is going to be kind for the Magic Weekend at the Etihad Stadium, at least on Saturday, according to the weather forecasts.

But the prospect of good weather isn’t the only reason to look forward to the two days of intense action that we are about to see in Manchester.

The seven fixtures that we will see this weekend are exactly the same fixtures we saw at the same event last year.

But in several respects they look more attractive in 2014 than they did in 2013 for a variety of reasons.

The event will begin with London Broncos facing the Catalan Dragons, with the game kicking off at 12.30pm. My advice to anyone intending to head to Manchester is to be there for this game.

Last year it was a very entertaining match, and it promises to be even more so this year, if only because we could witness the first win of the season for the Broncos.

With new coach Joe Grima in charge the Broncos were leading Huddersfield Giants 16-10 at half-time at The Hive on Saturday, before they fell away in the second half.

The previous night the Catalans had given one of their almost inexplicably bad performances to go down heavily to Warrington Wolves. For some reason they seem unable to travel successfully this year, and this must give the Broncos tremendous hope that they can get off the mark at last.

Last year we saw a sparkling performance from Morgan Escaré, who announced his arrival as one of the young stars to watch in Rugby League.

I suspect that this year we may see one of the younger London players – perhaps Mason Caton-Brown or Iliess Macani – showing us what they are capable of. If they do, it would be a shame if there was no one in the stadium watching them, which is clearly a danger if last year is anything to go by.

So let’s all try to be there for the start.

The second game, between Salford Red Devils and Widnes Vikings, is equally interesting.

If Salford are going to make a challenge for the play-offs, this is surely where they have to begin climbing the table.

The Vikings suffered a shock home defeat to Wakefield last Friday – their first home defeat since losing to Castleford last August – and they will be anxious not to lose more ground on the leaders.

But the really fascinating contest in this game will be the battle between the two stand-off halves.

Who is the most creative of Rangi Chase and Kevin Brown? I really don’t know, but I’m looking forward to finding out.

The Red Devils, playing in their Manchester back yard, will have a lot at stake. If they can perform well, they may be able to persuade some of the neutrals to come and see them at their home ground.

And what about the battle between the two Hull clubs?

Who can ever forget the try awarded to Hull FC by video referee Steve Ganson last year. It won the game for Hull and on the Saturday evening the RFL apologised to the Robins – an apology that their Chairman Neil Hudgell described as “empty and tokenistic”.

The black and whites come into this game on the back of two disappointing home defeats to Wakefield and Wigan.

Their Chairman Adam Pearson has a background in football, where managers are sacked frequently. I wonder whether Lee Radford’s tenure at the KC Stadium will be able to withstand many more disappointing defeats.

A victory on Saturday would certainly do wonders for his confidence and that of his Chairman.

On the other hand, the Robins will be desperate for revenge after last year, and the two clubs played a thriller at Easter at the KC Lightstream Stadium.

I’m impressed by the Robins’ halfback combination of Travis Burns and Kris Keating, and I also like the Robins’ prop forward Michael Weyman.

I suspect they may have too much firepower again for their neighbours.

The final game on Saturday is between Wigan and Leeds.

At Headingley the Rhinos comfortably accounted for the Warriors, who were without their captain Sean O’Loughlin.

Sean was missing again last Friday night in Hull, but this time Wigan had an easy 16-44 victory, proving they can win without their skipper.

Now it looks as though Sean will not be fit for Saturday.

But even if he isn’t playing, Wigan coach Shaun Wane will be desperate to win this one, and I’m sure some of the young bucks in the Wigan side will be straining at the leash.

Watch out for John Bateman having another go at trying to put Jamie Peacock off his game.

If Leeds can win again they will be seven points ahead of Wigan in the league table, and probably uncatchable. This game will be a genuine heavyweight clash between two great teams, and will round off the first day’s action beautifully.

And what a game to start the second day!

Wakefield will take on Castleford.

Suddenly this game looks far more exciting than it did a few weeks ago.

Not long ago Wakefield were looking like a hopeless case, but suddenly they have players all over the field who are starting to play with great self-belief, and they have a genuine matchwinner in Jarrod Sammut.

The Tigers still look too strong for Wakefield in my opinion, but a few weeks ago when they played at Belle Vue, the margin was 23 points and Daryl Clark had a blinder.

I doubt whether the margin will be 23 points on Sunday.

Then we have the game that looks, if we’re honest, to be potentially the most one-sided game of the weekend, as Huddersfield take on Bradford.

But again, I don’t think it will be as one-sided as we might fear.

The Bulls conceded 50 against St Helens last Sunday, but they were missing Luke Gale, who I think is absolutely vital to their chances of winning games. I think he is possibly even more vital for the Bulls that Sean O’Loughlin is for Wigan.

If Luke plays, I think the Bulls will give the Giants a very tight game.

If he doesn’t, I suspect the Giants will enjoy a relatively easy ride.

The final game is between Warrington and St Helens, and again on the face of it we may think that the Wolves are heading for another significant defeat.

They didn’t have to play well to beat the Catalan Dragons on Friday night, while Saints seem to be finding the form they were showing at the start of the season, when they beat Warrington 38-8 at the Halliwell Jones Stadium.

Does that mean they’ll enjoy another large margin of victory?

Again I doubt it. Warrington need to win to keep up with the top teams, and I’m certain they will give us one of their best performances of the season.

If St Helens go into this game with any degree of complacency, they could come a cropper.

There is bound to be at least one surprising result at the Etihad Stadium this weekend, and I think there could even be two, in the first and last games of the weekend. Don’t say I didn’t warn you.

You can see Martyn Sadler talking to John Davidson about the Magic Weekend on this Totalrl.com video.

And if you would like to tell us which game you think will be the closest at the Magic Weekend, you can do so by voting in our Readers’ Poll on this website.