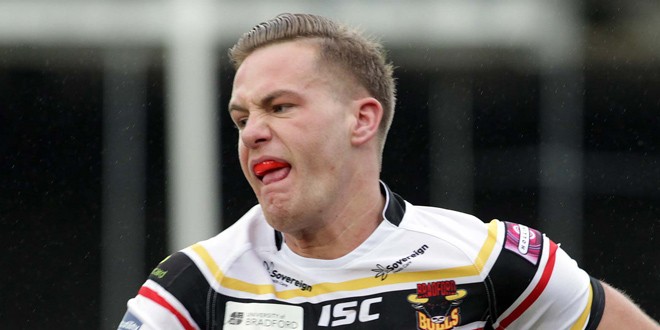 To say it has been a tough two years for Bradford Bulls would be a huge understatement. Rugby League World finds out what it’s been like for the players as they enter a new era under incoming chairman Marc Green…

Bradford Bulls winger Jamie Foster wasn’t even born when Yazz topped the charts in 1988 with their smash hit “The Only Way Is Up”. But with a new owner now on board, the 23 year old knows that those words will never be truer in the lives of everyone involved at Bradford Bulls.

Although, let’s face it, things probably couldn’t have got any lower – rock bottom of Super League having had six points deducted for entering administration, a squad down to the bare bones through injuries and enforced departures, and the constant worry for everyone as to just what future the club had.

But with Marc Green, owner of Safeguard Security Group Ltd and former debenture holder, now in charge, Foster believes the club can look ahead to a bright future.

“We have all meet Marc Green and he seems a genuine guy,” Foster told Rugby League World.

“He was very open with us about his business and what his turnovers are. He sold it well to us and we are all behind him.

“He’s given us his word that he’s going to put his money where his mouth is and will give Franny a budget to spend. It is an absolute must that he invests in the squad and brings in some new faces as soon as possible. There is only so much we can do with the small squad we have.

“Since it all went through there has been a massive change in the feeling round the club. Over the last couple of years it has been an endless run of disappointment so now there is just a big sense of relief that it’s all over.

“We have been in the situation before that we have met the new owners who have come in and said ‘we’ll do this, this and this’, and then all of a sudden they come back and tell us that the club are in £500,000 in debt and that cuts are needed.

“But we have been impressed with Marc. He has a great background in business and has some real money behind him, which is a big boost. We will not scrapping the barrel just to survive.

“Owners in Rugby League need to realise that our game is not like football. They are not going to make however many millions of pounds profit a year. Guys like Eamonn McManus at St Helens and Dr Koukash at Salford will be pumping money into the club for years to come, even if they are successful, and it’s because they love the game and their club.

“Marc is willing to invest and definitely sounds like he has that love of the game to do the same thing.

“As a squad we now need to kick on from here. We are all looking forward to working for Marc and paying him back with some success and that starts this year by staying up.”

Crazy times
With two teams being relegated at the end of the current campaign, staying in Super League will be Bradford’s biggest aim now, especially as the club will return to their full compliment of Sky TV money from 2015. And now that they are able to concentrate fully on on-field matters, rather than everything else happening off it, Foster is confident they can add to the two previous wins they have earned at the time of writing over Wakefield and London. A promising performance against Widnes Vikings just days after the new ownership was announced helped to show that this could happen, even though it did end in a narrow four-point defeat.

“In such a tightly salary capped sport like ours, a lot of players do still budget month by month, so if you are paid late or miss a payment it does affect you. We shouldn’t be worrying about mortgage payments or when our next pay cheque is coming, we should be worried about or performances.

“The first thing we should have been doing at training on a Monday morning was working on our game, but for us we’ve been going into yet another meeting about pay, the ownership situation or finding out someone is leaving us.

“It has been a crazy situation and with all that happening, of course it was difficult to focus on games each weekend. We could have gone two ways about it. We could have given up or we could do what we did, which was knuckle down for each other and focus on what we could control – the outcome of the games.

“Results have been mixed but now that this massive weight has been lifted off our minds, we can really focus on going out on to the field, performing to our best and getting points on the board rather than worrying about paying the bills.

“It has not been a nice situation to be in and I wouldn’t wish it to happen to anyone else.”

But it has not just been on the field that the constant uncertainty has taken its toll on players, and Foster is no different.

“We have all been affected in different way,” he added.

“There were the younger guys who can go through life without too many worries so the situation didn’t get on top of them as much as the guys who are providing for a family and paying mortgages.

“I am one of a few guys who have business interests away from the game so getting an income from that was different again.

“But it would wind me up that I was going home and my mum or my granddad would be telling me what the situation was at my work. Sometimes my granddad would ring me up and say something like, ‘Did you know your owners have walked out?’ and I’d say, ‘Of course I know, we’ve been having three or four meetings a week about what’s happening’. So I would getting cranky with my family and it should never be like that.

“Anyone should be able to get home and relax, see their friends and have them asking how you are, rather than asking what’s happening at work.

“It’s great that it is all sorted now and thing can get back to normal.”

No more vultures
The seemingly never-ending off-field issues have led to some players moving on to pastures new in order to retain the regular and steady income needed to support themselves and their families. While Foster does not blame these guys for taking opportunities elsewhere, a move away from the Provident Stadium was never on his mind.

“Around Christmas time we were pretty much all up for sale and it almost felt like the vultures were circling over us, waiting to pick people off.

“We lost a few players and it was sad to see them go, but we all understood why they did it. Garreth Carvell was first one and the press made that story massive and almost turned him into the bad guy.

“It is easy for people who don’t know whole story to turn round and say that these guys have walked out on us, but we have seen the other side of it.

“Nick Scruton was sat in front of us and there was absolute silence. His eyes filling up with tears when he was telling us why he had to go.

“No one wanted to walk away but it got to the point for them that things had to be done.

“There are others that could have left and got security elsewhere, me included. My agent was in touch with me on various occasions about other opportunities but each time I told him that I wanted to be loyal to Bradford and I didn’t want to walk out and turn my back on them.

“All I can remember growing up is Bradford Bulls being a massive club with great players and we need to start getting the club moving back towards that now. I want to help bring those big nights back to Odsal. We know it wont happen overnight, but it is exciting to think that for everyone at Bradford Bulls now, we are part of something new.

“This is a great club and we deserve a whole lot better. With Marc on board now I am sure we will now get that.”

This article originally appeared in Rugby League World magazine, the UK’s most popular monthly Rugby League publication. You can learn more about the magazine here, read some more of its content on this page, and find out how you can get hold of it by clicking here. You can also follow the publication on both Twitter and Facebook.