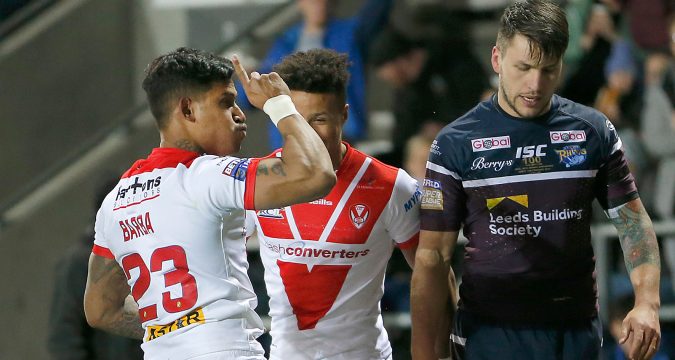 St Helens fullback Ben Barba admits homesickness played a major role in his decision to leave the club at the end of this season – but insists he’s determined to bow out with a Super League trophy after admitting he wants to leave his mark on the town and the club.

Incessant speculation over Barba’s future was finally settled last week, when it was confirmed he would be returning to the NRL in 2019 to join North Queensland Cowboys.

And, speaking publicly for the first time since that move was confirmed, Barba – who was included in the 2018 Super League Dream Team on Monday – admitted there are mixed emotions surrounding his impending exit after explaining what made his mind up about leaving the Saints a year out from the end of his contract.

“I’m trying not to think about it – I got a bit emotional the other night when I got up at the presentation,” he said.

“I’ve said it from the start that this place has meant a lot to me. It might feel like I’m deserting them, but at the end of the day I was homesick and was struggling. I was thinking more about going home sometimes than being here, and it was better for me to go instead of staying around, kicking stones and not putting 100 percent in for St Helens.”

And Barba admits nothing other than a Super League title will be the perfect way to end his time with St Helens before heading home.

“The aim for all of us, and myself especially, is to leave with something,” he admitted. “That was my main drive when I came here, to leave a mark on the team here and the club, and not just come here and mess around for a year and take off. I wanted to come here and make a difference to the team and leave my mark.”

And Barba admits he will look back on his time with the Saints with happy memories.

“I’m a likeable person I think so I always knew I was going to fit in, and always knew that give the boys a bit of time with me, and I’d rub off on them,” he said. “But it probably worked a lot better than I thought.

“I always knew the history of Saints and the guys that had come here that are Australians, and how much they adore them. They played their heart out for the club and they loved them for it, and I said to Justin (Holbrook) that’s what I wanted to do. I didn’t want to make fun of the jersey, serve my ban and not try to play decent at all. I bought into everything that the club and town was about and tried to do my best for the side.”