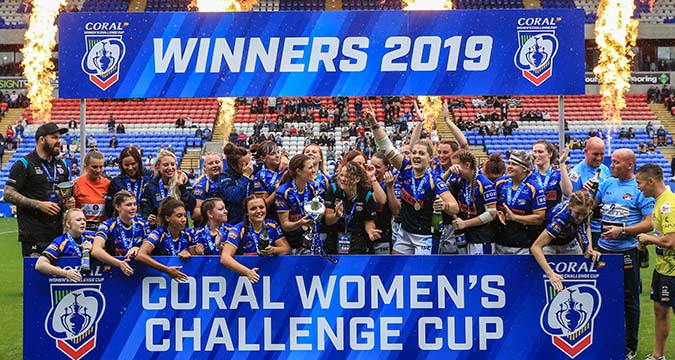 AMBITIOUS York City Knights are eyeing a place in the Women’s Challenge Cup Final, which is to be broadcast live by BBC TV next month for the first time.

The City Knights completed a big week during which began with seven new signings being made by recently appointed director of rugby Lindsay Anfield, and it ended with the Knights beating Wigan Warriors 30-24 in the quarter-finals of the competition.

Castleford Tigers are also through after a 26-6 win over Warrington.

The final will form part of a triple-header with the men’s semi-finals on Saturday, June 5.

It will be shown live on BBC Two with an 11.15am kick-off. The venue for the three games is yet to be confirmed.

The semi-finals of the women’s competition, like the men’s sponsored by Betfred, are on Saturday, May 22.

The BBC’s Head of TV Sport, Philip Bernie, said: “The BBC prides itself on being the home of major sporting events and has led the way in showcasing the best of women’s sport to the widest possible audience.

“We are delighted to be able to show the Women’s Challenge Cup Final live on BBC Two for the first time and look forward to what we hope will be an action-packed match.”

Later this year, BBC Sport will show all 61 matches from the men’s, women’s and wheelchair World Cup competitions live across all platforms.

The Women’s Challenge Cup dates back to 2012, when Featherstone Rovers were the winners.

Leeds Rhinos were 16-10 winners over Castleford in the 2019 final at the University of Bolton Stadium.

Last season’s competition, like the Women’s Super League, was cancelled because of the pandemic.