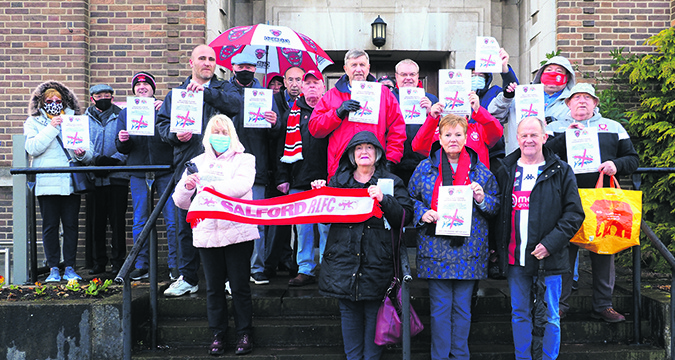 A PETITION opposing the potential sale of the AJ Bell Stadium to Sale Sharks – a move Salford supporters claim could seriously threaten the future of the Red Devils – has gained more than 5,900 signatures.

And last week a group of Salford fans staged a protest on the steps of Salford City Council’s headquarters as local elections were taking place on Thursday.

The Rugby League and union clubs have been co-tenants at the stadium, which is owned by City of Salford Community Stadium (CosCos), a joint venture between land giants Peel Holdings and Salford City Council, since 2012.

The £26 million facility was originally built for Salford Red Devils, but Sale Sharks signed a 25-year lease on the stadium shortly after its construction.

Now the rugby union club has approached the Council about buying the 12,000-capacity ground, which is located in Salford close to the Trafford Centre and the M60.

There is also speculation that Salford City, the Football League club co-owned by a string of former Manchester United stars, are interested in playing there rather than at their current Peninsula Stadium, which holds 5,100.

It’s believed that Salford Red Devils are both preparing a counter-offer and looking into an attempt to renegotiate their tenancy agreement.

Salford Red Devils Supporters Trust have expressed fears that should Sale Sharks succeed in buying the stadium, the Rugby League club will be kicked out as the football club moves in.

Were that to happen, it’s suggested that, at best, Salford would have to play at the Peninsula Stadium (previously known as Moor Lane) and at worst, would be left homeless, potentially threatening their existence.

Trust chairperson Pete Brady said: “Rumours have circulated in the city that the stadium is to be sold to Sale, possibly in partnership with Salford City FC, as Gary Neville has been spotted at the stadium on a few occasions.

“Sale do not want Salford in that stadium, it’s as simple as that, and we’ll end up having to pay an enormous amount of rent.

“That will mean we won’t be able to afford to invest in players, and before you know it, we’ll get relegated, we’ll be at Moor Lane and then we’ll become a part-time club.

“We just can’t stand by and let them do that.”

Brady added: “Let me share with you the background on how the AJB, then the Salford Community Stadium, was originally funded.

“The Council were able to secure a grant from the European Union to part-fund the stadium and within the original application it was stipulated that stadium should be used as a community stadium for the people of Salford.

“Ten years later, if the Council were to sell the stadium to the Cheshire-founded Sale Sharks, we believe this is contrary to the original aims of securing the funds and a betrayal to the fans and the wider Salford community.

“The Council need to appreciate that at a time when we are seeing cuts to local services, Salford Red Devils and SRD Foundation add real value to the city through their sterling community work, whether it be addressing mental health issues through the Offload programme, player development in schools and the community clubs, working with disabled children to provide support to overcome barriers through the Captain Confidence programme and the Youth Pathway programme that Paul Rowley will lead.

“If we lose the club, we lose the foundation and Sale Sharks community programme offers nothing to our city.

“It’s impossible to put a value on this, but without it our community would be so much poorer.

“As loyal fans, we must not allow the stadium to be sold without first securing the long-term and affordable future of Salford Red Devils.”

Salford City Council says it is committed to finding an outcome that supports the Red Devils.

Peter Openshaw, interim strategic director of the place directorate, last month said: “The stadium is owned via a 50-50 management partnership through the stadium company CosCos, and CosCos has been approached by a potential buyer, but no formal offer has been made. Salford Red Devils are also preparing a purchase proposal for consideration.

“No timescales have been set and no decision has been taken on whether to sell the stadium or on any terms of sale.

“The Council is not the sole decision maker, but all offers will be considered on their own merits and there is no guarantee that a sale would even be agreed at the end of the process, as has happened previously.

“Salford City Council has supported Salford Red Devils and Rugby League in the city for many years and we continue to do so.

“Previous actions – including payment holidays on rent and loan support – have stabilised the club and given the board time to make longer-term plans.”

Readers wanting to sign the petition can do so by going to www.change.org.