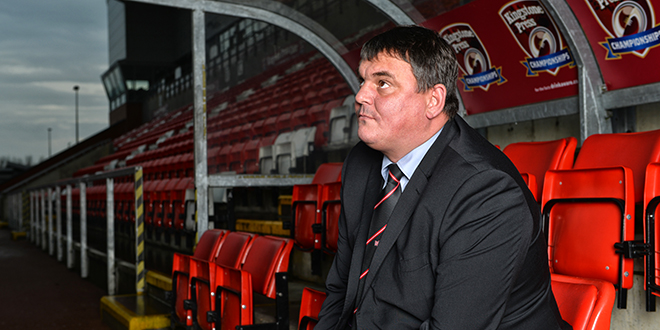 Leigh owner Derek Beaumont says the club should be credited for taking on the challenge of Super League rather than criticised after a starting with a string of defeats.

The Centurions were elevated from the Championship for a third stint in the top flight in place of Toronto through a bidding process.

And they are desperate to defy the odds and avoid an immediate relegation, as happened in both 2005 and 2017.

Leigh went into Sunday’s home clash with Huddersfield on the back of seven straight losses, including one against the Giants in the third round of the Challenge Cup.

“I will defend my players and my club,” he wrote in his programme notes for Monday’s home game against Wigan, who won 30-16.

“We found out in mid-December that we were being promoted, on considerably less central funding, when all Super League teams had finished their recruitment and we had not played or indeed trained since March that year.

“We should be credited for how we have embraced the opportunity and competed well with Wigan in round one and St Helens in round five.

“In a short period of less than five months from being promoted, we have had installed full TV arc perimeter LED boards to our fantastic stadium, something most Super League clubs do not have.

“It is easy for many to write our team and club off, and it really does grate me.

“I was sent a short snippet of the comments of (Jon) Wilkin, who in my opinion appears to have a clear agenda against Leigh based on many comments over a prolonged period, and in particular this year, starting with the warm-up game against Saints for Tommy Makinson’s testimonial aired on OurLeague.

“He states on three occasions within a 13-second period ‘that Saints were just better than Leigh’.

“I am not a pundit, but if I was going to make comments on a fixture between two teams, I would do my research.

“Saints were better than Leigh on April 28 at home, winning 28-6, hardly a thrashing.

“On to this year and March 13, Saints weren’t better than Leigh, losing 25-24, albeit it in a warm-up game that we kindly played in, taking no income whatsoever and our players attending in their cars to save Tommy the cost of a coach.

“He seems to forget that a lot of our players were his teammates at Toronto, where he felt having been beaten in every Super League game he played in with them, they should have stayed in the competition.”