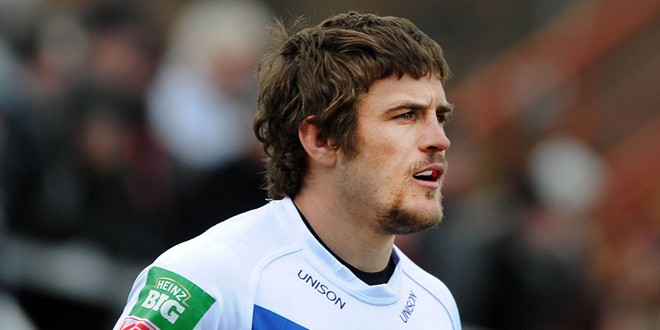 Hull KR winger Ben Cockayne opens up about his life away from Rugby League. Everything from a love of steak to serving in Iraq…

What is your favourite food?
I’m just out walking the dogs down a busy road so apologies if I have to shout at them. I’m a steak man. I like it with a jacket potato stuffed with cottage cheese. And a fancy salad with a nice dressing. My favourite cut is ribeye and I have it cooked medium.

What song do you listen to more than any other?
At the moment I am quite into Plan B. My favourite song of his is Deepest Shame. That’s my favourite at the minute.

Do you have any superstitions?
No, I’m not into any of that. Though I do believe everything happens for a reason. That’s as far as I go in terms of superstition.

If you could have any superpower, which would you pick and why?
I’d like to be able to fly. It’s always something I’ve wanted to do, but saying that I’m scared of heights so it doesn’t make much sense. The thing I’d do first… I could say something mischievous here – I’m tempted to say I’d fly over to the KC and drop a turd on it.
[On his walk, Cockayne is pulled aside by former Castleford, Wigan, and Great Britain stand-off Tony Smith]
Sorry, that was Tony Smith. He pulled me to the side and asked if I fancied a game of golf. Back to the question, I would probably fly to an exotic country. I’m liking what I have seen on Twitter of Bora Bora, I don’t even know where it is, but I’d fly there. I’d probably need a map.

What’s your favourite animal?
Dogs, I’ve got three that I’m out with now. I have a good mixture – I’ve got a Jack Russell, a Rhodesian Ridgeback, and a Labrador crossed with, well I’d say an elephant looking at the size of him, but I’m not sure what he’s crossed with. I’ve got Harvey, Wilma and Phoebe. They’re pretty well behaved. My Jack Russell, I’ve only had her eight months and when she moved in she caused a bit of aggro with my eldest, Harvey. She attacked him a few times but they’re pretty cool now.

What is your favourite colour?
Red – it always has been and it has nothing to do with Hull KR. It goes back to school and reading the Roger Red Hat books. There was Billy Blue Hat and Jennifer Yellow Hat too.

It’s my round, what are you drinking?
I like a lager. I’d probably go with a bottle of Budweiser. I drink that all night, I try keep on the bottles so I don’t drink as much and keep it the same all night so I don’t end up in a bad state. I’m done drinking stupid stuff.

TV or a film?
I have started watching films a bit more now, but I am more of a TV man. Mostly I’ll just watch Sky Sports News but if I have a day off and I’m sat in the house at half nine I watch Jeremy Kyle. See some nice teeth.

Do you have any bad habits?
I tend to swear a fair bit, that’s probably my worst one.

Who is your best friend in Rugby League?
I have a few good mates, but me and Scott Murrell had a really great relationship when we were both at Hull KR but I don’t see much of him these days. It’s a bit of an awkward one that because if I say someone is my best mate and they don’t say it back I will look a bit of a t*t. But me and Scott had a great relationship, so I’ll say him.

Are you tidy or messy?
I like to think I am tidy but my missus disagrees so I would have to say I am messy. There’s always stuff lying about and hoodies and clothes on door-handles instead of the coat rack and stuff like that.

What was your first thought this morning
Who’s that at the door? One of my mates came round at quarter-past eight for some stuff.

What was your first car?
My first one was a Renault Clio, a hairdresser’s car. It was black and cost me about £6,000. My dad helped me out. But my favourite was a three-wheeler Robin Reliant I had after. It was two-tone orange and red. It was M reg and I got it for about £400. It was a right laugh. I had it on two wheels once, nearly flipped it over.
PHOEBE! PHOEBE!

Do you have any hobbies?
I do like golf but I also love walking my dogs. I’m normally out with them at 6 in the morning before training and on my days off we go out a lot. We can do anything from a mile to eight, 10 miles. Just walking. I took the Jack Russell out for a couple of runs earlier this year because she seems to have more energy than anything else I’ve ever known. It’s normally just a casual walk, though. My old dog is slowing down now, the old feller.

Who is your favourite fictional character?
[Deliberates for a minute] The Mask [Jim Carrey in the 1994 film of the same name]. I like the Mask, he’s a right lad. I wouldn’t mind being him for the day.

What was your first job?
I was a labourer for my dad straight out of school. I also had a milk round when I was at school but that only lasted a few months because I used to fall asleep in lessons. My mum wasn’t happy about the phone calls about that. At the building site, they got me with the old bubble for the spirit level trick and I also got sent to the shop to get some Russian round squares.

What is the greatest moment of your life so far?
Probably playing for the England Knights. To some people that won’t seem like **** all, you know what I mean, but it was quite a big deal for me. In terms of biggest moments, I went to Iraq in the war but that was a different kind of moment.
I went there in 2003, when it first kicked off. I did about three or four months. I was quite fortunate – I didn’t have to fire a weapon once and didn’t really see too much. We had to put our chemical warfare suits on a couple of times when they were firing back at us, but other than that it was quite a safe trip. It was scary, and I was only young. I was trying to get out of the army for ages because they posted me to Germany after Iraq. When I was in England I could come back every weekend and play for my amateur club (Normanton Knights) and there were whispers that part-time clubs wanted to take me on. I thought the army was ruining that so I ended up leaving.

Who is the worst dressed Super League player?
I could go back to my old Hull KR days here and have a good pop at Benny Fisher, but I might give it to Danny Kirmond. Yes, I will. He thinks he’s down with the kids, you know what I mean. He’s into the shirt buttoned right up to his neck and stuff like that. To be fair, most people would think that is pretty cool but I’m just a jeans and t-shirt man. He’s all-out, funny coloured jeans and all sorts. I’d give it to him and hopefully he will have a swipe back when he gets the chance.

What do you want to do when you retire?
I just want to keep on what I’m doing now, which is my business away from rugby, health and nutrition. It’s going really good, it probably pays me, it certainly paid me a bigger income than what Wakefield paid me. What happened was, when I went to Hull KR in 2011, I went to Featherstone to finish the season off there and had a lot of spare time on my hands so did my personal training course and got my level three certificate. The business that I’m involved with, Herbalife, fits in with what I do now, promoting a healthy and active lifestyle. I wouldn’t mind a few houses as well, to get myself a bit of a property portfolio.

What do you hate more than anything?
I don’t know. One thing that gets on my nerves a lot now, I probably can’t say anything as I was a little swine being cheeky and that, is the way young kids are going these days. It’s insane really how they can get away with speaking to their teachers like they do and walking out of lessons. I’m probably being a bit of a hypocrite going down that route as I was a little sod myself.
I don’t like dickheads who drive in the middle lane on a motorway. ****ing hate em.

Who is the funniest player in Super League?
Richie Mathers is the funniest bloke I’ve come across to date. He does all sorts of weird stuff. Silly dancing, talks about – I think he’s got a bit of a gay streak in him – he cracks on about stuff like that. Always messing with his.. just being a grub really. He’s the funniest player I’ve played with, just to be able to laugh at, at training or away from rugby he’s always the one making people laugh.