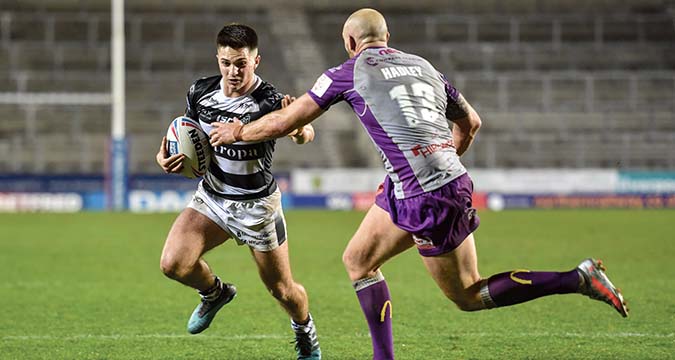 Adrian Lam’s Wigan team will lock horns with Hull FC in the Challenge Cup quarter-finals on Saturday. And guiding the Black & Whites around the park could be a player that Lam knows all about.

Ben McNamara and the Warriors boss have a close relationship that goes back many years and to another hemisphere, to the eastern suburbs of Sydney. When McNamara was just a teenager, a young product coming through the ranks, Lam coached him for several years in the amateur ranks.

Before Lam moved to England to take over at Wigan, he was part of the Sydney Roosters staff and coached community club Clovelly Crocodiles. There he helped the Englishman learn the game and develop his own skills.

It was something McNamara admits had a big influence on him.

“I played for Coogee Wombats for a year and then I moved to the Clovelly Crocodiles,” the 19-year-old explains.

“Adrian Lam was my coach as his son Bailey played in the team. So I know Adrian quite well and I learned a lot from him.

“I played a bit for the junior development team for the Roosters – Under-13s, Under-14s, Under-15s – that kind of age. I really enjoyed it.

“I know I was still only young, but that was important for me because I had always been quite a good player here in England, and then I went over to Australia and I was the youngest in my age and it was obviously a different level and there was kids that had matured a lot earlier.”

McNamara believes his experience in Sydney and under Lam’s guidance, who reportedly even tried to sign him to the Warriors from Hull FC in 2018, had a major impact on him and his budding career.

“To the point where I was at Marcellin College, I was in the third-string team of the school because that was the level I was at,” he says.

“So it took me a few hard games to sort of work out that I needed to be a bit tougher. It taught me a lot to be fair.

“Living in Clovelly was definitely the best thing I’ve done in terms of a life experience. Obviously just the enjoyment, and being able to live in a new place, and a place as nice as that.

“Just taking me out of my comfort zone, as I didn’t know anything else apart from where I’d live before near Hull. So it was a massive change, but I think it was a really good for me and the family enjoyed it as well.”

McNamara moved to Australia at the end of 2013 when his father Steve, the current Catalans coach, joined the Roosters’ staff.

The teenage playmaker has Rugby League blood coursing through his veins through both Steve and his grandfather Ted.

Steve played for Hull FC, Bradford, Wakefield and Huddersfield from 1989 to 2003, as well as representing England and Great Britain, and has had spells coaching Bradford, the Dragons and England.

The halfback describes his father’s influence on his career over the years as being huge.

“The most out of any individual person,” Ben said.

“The two opinions I value the most are my Dad’s and the coaches [at Hull FC]. He’s been really good because he’s always got the balance between encouraging me and telling me when I need to step up training, or I’m not at the standard I need to be at with my work ethic.

“But he’s never been too critical of my performances, he never forced me to play the game or anything like that. He’s always encouraged me to do what I want, whether going into my studies or education.

“I’m really grateful for everything.”