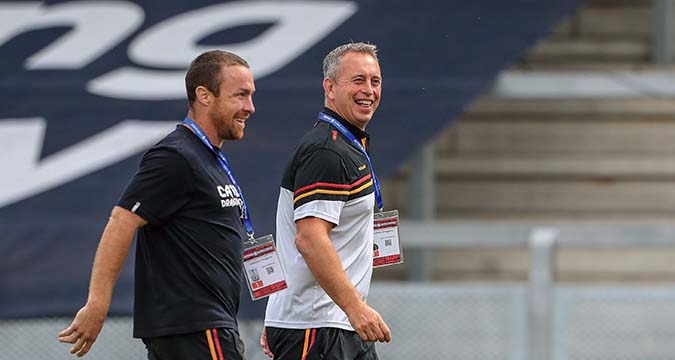 Catalans coach Steve McNamara believes the best is yet to come despite the club’s strongest-ever start to a Super League campaign.

The Dragons backed up recent wins over Hull and St Helens with a crushing 48-0 demolition of previously unbeaten Wigan at the Stade Gilbert Brutus on Saturday.

But McNamara is refusing to get carried away with his side’s seven-from-eight record so far this season.

He told League Express: “It’s a good start to the season for us, but we’re only eight games into a 27-game season, so there’s lots of work to do and our next challenge is Leigh away (on Saturday week, June 12) following the break for the Challenge Cup.”

McNamara is keen to keep his players’ feet on the ground, adding: “When you start a season, nobody completely knows where they will be after eight rounds.

“It’s a new group for us, but I knew that after a tough pre-season where we couldn’t train together, once I saw the work they had done on their own and in small groups, we would come together quickly.

“It was always going to be tough but we have had a good start and I hope it continues.”

McNamara singled out the performances of two young French players against Wigan.

He added, “Arthur Mourgue and Matthieu Laguerre have seamlessly fitted into the side. It was Matthieu’s first game on the wing and I thought he was great.

“And the impact Arthur made was there for everybody to see, so much so that we didn’t need to put Michael McIlorum back on the field. Micky had a bit of soreness in the neck area all week but he pushed on and got us off to a great start then Arthur finished it off.”

Catalans have said they will “vigorously defend” their registration of estranged centre Israel Folau following an attempt by the player to escape his contract.