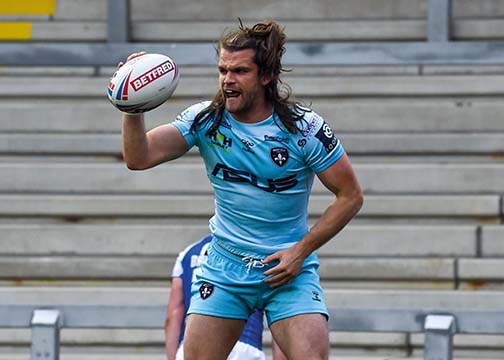 Liam Kay says Wakefield want to kick the phrase ‘four-pointer’ into touch as quickly as possible.

Pundits have been describing Trinity’s home clash with one of the winger’s former clubs Leigh this Sunday in those terms after a tough start to the season for both teams.

But Chris Chester’s side finally picked up their first win at the seventh attempt (eighth if the Challenge Cup is included) by beating Hull KR 28-12 at the Mobile Rocket Stadium to provide a boost ahead of their home derby against Huddersfield.

And Kay, who crossed twice against Rovers, says he and his teammates are determined to climb the table as quickly as possible.

“People tend to say four-pointer when they are talking about relegation,” said the Leeds-born 29-year-old, who returned to his first club Wakefield from Toronto midway through last season.

“We want to get away from that area of the table as soon as we can, and there is still confidence among the boys, especially after beating Hull KR, that we can be challenging for the play-offs.

“That first win had definitely been coming, because we’d been close a number of times, and we know we have the players to be much higher up than we are.”

Trinity have had a string of injury problems, and Kay, who made his first debut for the club in 2012 before moving on to Leigh in 2014, then Toronto in 2017, revealed at one stage, he was preparing to stand in at fullback.

“That’s been one position where we’ve been especially hard-hit, and I had a couple of training sessions concentrating on playing there before Olly Ashall-Bott came in on loan (from Huddersfield),” he explained.

“It’s been a worrying time for Tom, but thankfully, we’ve been able to get around him and provide some support,” he added.

“It’s obviously important that he gets any issues sorted out, and it’s been great to see him back doing some training.”