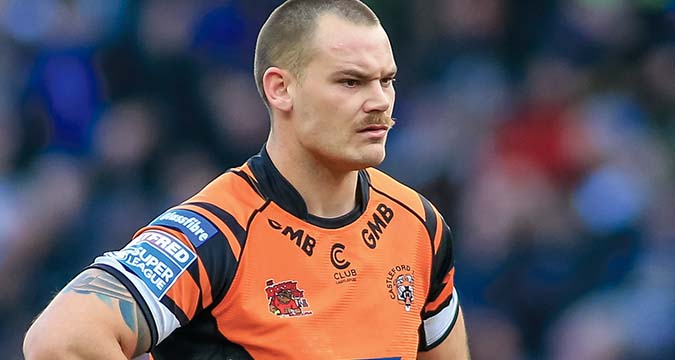 Cheyse Blair hopes to take Super League by storm in 2021 after converting to the backrow.

The towering Australian has been converted to the Tigers’ pack this season after offering promising insight into his talent at backrow last year.

Blair played in the pack at the start of last season before being forced to return to centre due to injuries and suspension.

But Daryl Powell has made the transition permanent heading into the new season, with Blair now training with the forwards ahead of the campaign.

“It’s very different for me,” he said.

“Training with the forwards, getting bashed up in wrestle, but it’s something I’m enjoying and looking forward to.

“I thought I was playing some pretty good footy before lockdown; Pete (Mata’utia) got suspended and I had to play centre but it’s something I’m really looking forward to and getting better at it during the pre-season.”

The 29-year-old’s pre-season was heavily disrupted last year after breaking his foot, an injury that saw him miss a large chunk of the build-up.

But he’s fully fit with less than two months to go before the season, and hopes that will stand him in good stead.

“Hopefully I get through this with no niggles and it gets me on the front foot.

“For now, it’s more about building combinations now I’m in the forwards, and working a lot with the halves.”