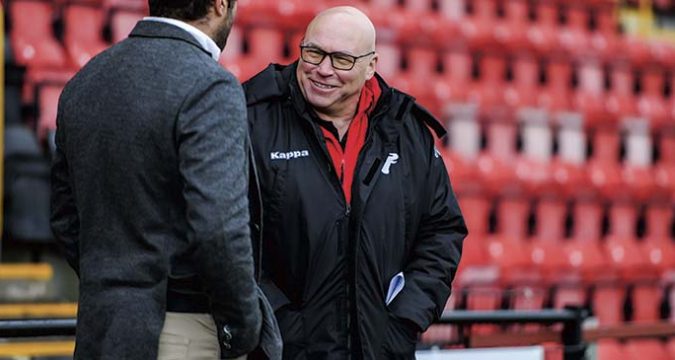 Levy Nzoungou is the latest player to commit to Bradford Bulls for 2021.

League Express can reveal the powerhouse prop has put pen to paper on a new contract with the club.

Nzoungou, who was born in Congo, joined the Bulls after a short spell in France with Albi.

A product of St Helens’ Academy, the 22-year-old earned a move to Melbourne Storm in 2017, but returned to Europe with Toulouse later that year. After spells with Salford and Hull FC, Nzoungou eventually made his way to Bradford ahead of this season and made six appearances before the lockdown and subsequent cancellation, scoring once.

He joins the likes of Joe Brown, Brandon Pickersgill and Sam Hallas in signing new contracts with the Bulls.

Rising star Brad Gallagher, who made his senior debut in 2019 and was an ever-present throughout the short-lived 2020 campaign, has also signed a new two-year deal.

“Brad is a really important signing for us and one of the youngsters who has emerged from the Academy to become an established first-team player,” coach John Kear said about the 20 year-old.

“He will become a very accomplished edge backrower and I am even happier that he has committed for two years, so we can help him develop further.

“He has been exceptional since coming into the first-team set up. He was given an opportunity and he has taken it, which is incredibly rewarding for the club and the Academy because he does not look out of place. That is credit to all involved.”