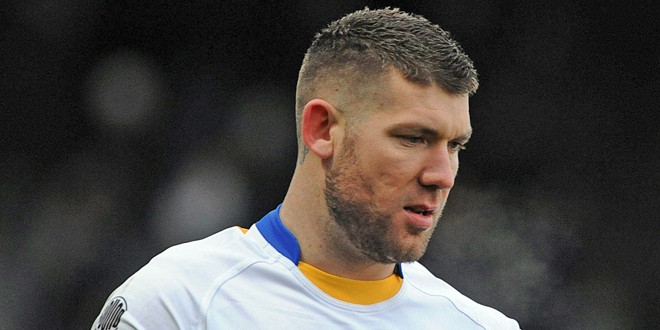 Leeds Rhinos coach Brian McDermott claims he had no choice but to leave forward Brett Delaney out of the side that defeated London on Friday night.

Delaney was left battered and bruised following the win over Widnes the previous week and, as much as McDermott admires the 28-year-old and his style of play, the coach knows that a rest was necessary.

“Brett Delaney looks likes he gets beaten up by gangsters with baseball bats every time he plays,” said McDermott.

“I don’t think he’s a target as such, he just has very little self preservation. If there is a job to be done he gets it done. If there is a tackle to be made or a possible try to be scored and he can see the gap closing up he’ll still go for it. Even from the sideline I’m cringing and I can’t believe he’s going to go for it.

“If there is something that he needs to do, even if there are knees and elbows all around him, he will do it and he gets bashed around. He has hurt his sternum before and he has an ongoing knee problem, nothing serious but it’s just aching. Then 24 hours after the Widnes game he picked his mobile phone up and his back went, so he’s had an epidural in that. Last week he was walking round as a ball of pain, so that is where we were with him.”