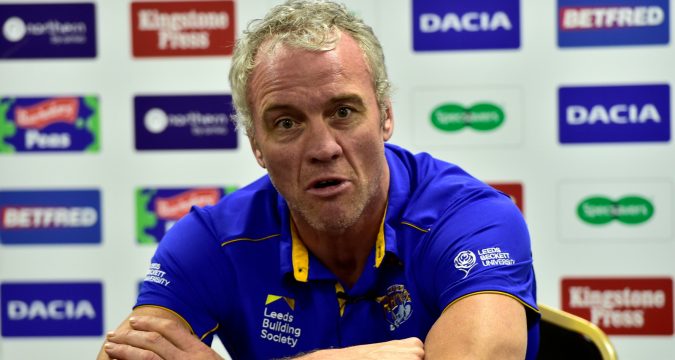 Brian McDermott has earned quite the reputation for his interaction with the media.

But the Leeds head coach might have surpassed his own standards with a bizarre analogy this week.

The Rhinos head coach was speaking to the press ahead of the club’s Challenge Cup game with Widnes tonight, with a place in the quarter-finals up for grabs.

McDermott was asked what it would mean to reach Wembley once again. He went on to compare it to being a bricklayer.

“I think if you’re a chef or a computer analyst or a banker or a bricklayer, there’s a peak of those jobs,” he explained.

“Whatever industry you’re in there’s a version of that everybody wants to do. There might be a job in another part of the world where all the bricklayers are thinking “If I could get that job that would be brilliant, I’d love to do that but unfortunately I’m laying bricks in East Leeds’.

“Well, the Challenge Cup is like a version of our industry that everybody wants to do.”

On a more serious note, McDermott hit out at Widnes’ pitch.

Leeds have endured a torrid run at the Select Security Stadium, which uses an artificial 3G pitch.

The Rhinos have lost on their last four visits to the ground, with their latest defeat coming earlier this season.

McDermott is one of several coaches to have hit out at the surface, which is due to be relaid at the end of the season.

“We train on a 3G field in Kirkstall. The 3G field we train on is better than their surface.

“I’m saying about Widnes’ ground I don’t like it, I wouldn’t want my team to play on it every week.”