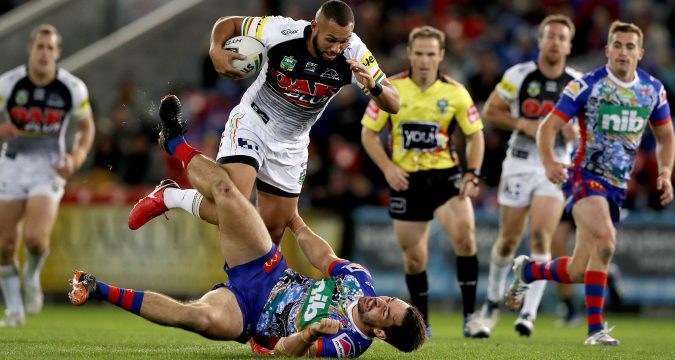 Penrith Panthers continued their fast start to the season with a 29-18 victory over Newcastle Knights.

Reagan Campbell-Gillard opened the scoring off the back of a Kalyn Ponga error. The New South Wales hopeful battered his way up the middle before stretching out.

The Panthers were dominating possession. Tyrone Peachey was next to score when he stepped off his right boot and charged at the Knights’ line.

But a Penrith error from kick-off gave Newcastle a chance to bounce back. Ponga put Mitch Barnett through a hole. The second-row found Connor Watson on his outside and the standoff scored.

Daniel Saifiti thought he had scored the leveller but Watson had interfered with a marker in the build-up.

The Knights created another chance when Lachlan Fitzgibbon broke through and fed Watson. But Watson’s pass to Brock Lamb was hopeless, fell for Peachey who ran off with it. He found Dallin Watene-Zelezniak who finished off a miraculous try.

Newcastle got back into the game when Lamb broke through and fed Ponga on his inside after the break. But James Maloney ensured the Panthers went home with the two points.

A field goal and a penalty from Maloney had them nine points in front but then his kick found Corey Harawira-Naera who sealed it with a try.

Nathan Ross scored with minutes left after good work from Barnett but it was a mere consolation try.