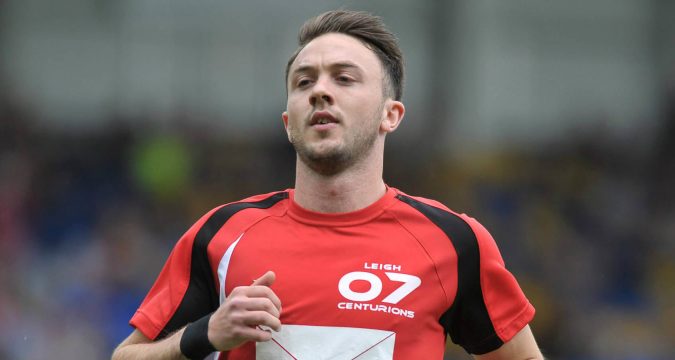 The League Express Readers Poll Championship Player of the Year has admitted he will ‘cherish’ winning his latest accolade.

Leigh’s star halfback earned over 34% of the vote to win the award, beating off competition from Halifax’s Scott Murrell and Bradford’s Lee Gaskell.

It was the latest in a string of individual awards won by Brierley, who paid tribute to his coach and team mates after being told of his triumph.

“First of all, I just want to say thanks to everyone who voted. League Express is a nationally recognised newspaper so it certainly means a lot to me to win this award.

“I’m flattered by the attention and recognition and it certainly is something I don’t take lightly. Rugby League is a short career and the awards and accolades are something to cherish and show your grandkids. It’s something I’m proud of.

“The biggest mention I could give is to Paul Rowley. If it wasn’t for him I wouldn’t be here today and he’s certainly helped me with a lot of things, not just on the pitch but off it as well. He’s making me a better person and a better player.
“I’m lucky to have a group of supportive people around me. My team mates at Leigh are outstanding and I’m sure they don’t mind me winning the award. I want it to reflect on them and the hard work they put in for me. It’s a great club to be a part of and I’m really privileged to be part of this squad.”

Brierley now has his sights firmly set on improvement, both individually and as a collective group, ahead of the 2016 season in which Leigh will go in search of promotion from Super League.

“From my personal point of view I want to train hard and achieve the goals we have in place next season,” he said.

“At my age you just want to get better. I’m always looking for that next step forward and for me that is playing well for Leigh Centurions and making sure this team gets into Super League where it deserves to be.”