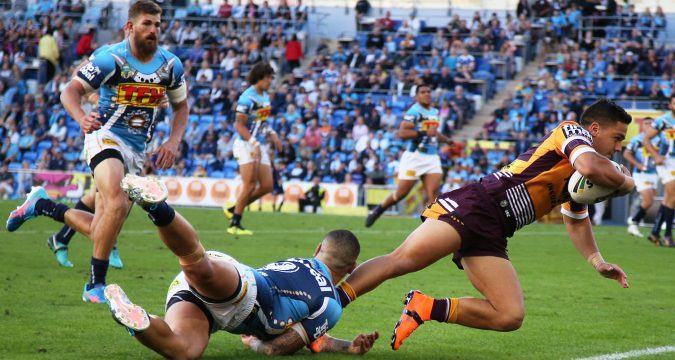 Brisbane were sent on their way early by rookie centre Kotoni Staggs. He set up Kodi Nikormia for the first try when he stepped and produced a brilliant offload. Staggs then scored a try of his own. Before diving over, he threw off Michael Gordon like a rag doll. It was a shame that Staggs had to leave the field soon after with a head knock.

Brisbane scored their third try of the half through Darius Boyd. He was found on the inside by Darius Boyd. Jamayne Isaako’s three conversions and a penalty had Brisbane up by 20 at the break.

Two more Isaako penalties followed after the break before Joe Ofahengaue scored to take Brisbane out to a 30 point lead, with the help of Isaako’s boot.

That lead was only extended with full-time three minutes away. Boyd and Jordan Kahu combined to send Jonus Pearson over.

Full match reports of all four of this weekend’s NRL games will feature in Monday’s League Express.