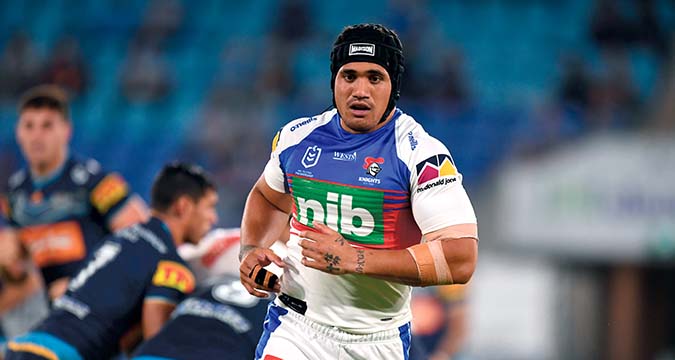 In theory, it’s not clear why Sione Mata’utia is moving to Super League at this stage of his life.

At 24 years of age he is young for an overseas import arriving in the competition.

But by the end of one video-call from his family home in Australia, his motives couldn’t be clearer.

The first reason is loyalty. Loyalty to his beloved Newcastle Knights, the club he has adored and represented throughout his career.

“I wanted to be there for as long as I can and until I retire.”

That dream, however, was taken away when the club informed him they wished to move in a different direction that didn’t include him.

“Coming to England and not signing for another NRL club is my way of being a one-club man,” he says.

“I’ve only ever wanted to be a Knights player and have one club next to my name.

“Our family moved up to Newcastle when we were young kids from Sydney. The club has paid for my school fees and helped my family out a lot. Until you’re a Knights player you don’t know what it means to be a Knights player. It’s a one-team town, a working-hard town full of good people. Footy is one of its main attractions. When you’ve been somewhere so long you have an emotional attachment.

“When I spoke to the club and the coach he had his preferences; we had a good, honest conversation. I wasn’t happy with the decision, but that’s the way it goes; Adam O’Brien is one of the best coaches I’ve ever had.

“I’ve got no animosity because they’ve helped me my whole life. I was just disappointed, as I had another year and I could train hard enough for another contract. But there were certain situations that meant I wouldn’t get in the team, which is fine. I understand it happens everywhere and it’s just the way the cookie crumbles. It’s part and parcel of our job, so for me it’s on to a new adventure.”

His second motive? A desire to be tested and a pursuit of a challenge that will ignite him to find his best form.

“I’ve got some goals, I’m hearing about the Challenge Cup, Man Of Steel, Dream Team, the same goals I had in the NRL. But the challenge to prove myself again, that’s the most exciting thing as nobody knows me over there and I’ve got to earn the respect of the players and the fans.

“Since we started negotiating the move, my fiancée and I were talking about whether we should move to the UK.

“But I said that I just had this feeling about coming to the UK, that there was something special waiting for me over there if I worked hard and stuck to the process of being disciplined towards my craft. And I still feel it now.

“It’s special how they play footy over there and I think it will suit me well. If I work hard enough I’ll reap the rewards. And I’ve seen what it’s done for my brother (Peter) over there and that’s intrigued me; I want to know what it can do for me too. It’s that good over there that he hasn’t been back since he moved.

“The challenge of entering the unknown is nerve-wracking but it excites me as well. I want to go and prove myself and prove that Kristian Woolf’s decision wasn’t a bad one. I owe him a lot and I need to prove to him that bringing me half the way around the world wasn’t a bad decision.

“The challenge of just being a better me is exciting and I think Saints give me the best opportunity to make more memories and more wins.

“It’s not somewhere you go and take a holiday or take it easy. I’m going over to enjoy my time there but win some footy games. I feel like Saints, from what I’ve heard, has that culture; they’re expected to be there at the end of the year and be in those finals. I wanted to be a part of a club that will push me to my limits.”

Quietly, perhaps, Mata’utia would admit to being comfortable in the NRL. His rise as a teenager was unrivalled and he represented Australia after just seven professional games. The issue with feeling comfortable is that it is almost always followed by complacency.

“There were many lessons to learn through those achievements,” he admits.

“I was on such a high as a young kid, I was roaming around with one of the biggest heads in town, but it taught me many lessons about being humble. I let myself slip. As a young kid I was on a decent contract and doing what young kids do. I’d missed out on a lot growing up through high school and I just wanted to catch up on that partying, catching up with friends and it bit me in the bum a little later on.

“I learnt pretty quick that in the NRL you’ve got to be consistent in what you do. I learnt that fast and it took me a few years to get back on track. Now I’m heading to the Super League, so I’m looking to get that form I had as a young kid and to enjoy my footy. You play at your best when you’re enjoying it and you’re winning.

“St Helens can help me get both of those things.”

Of all the things he’s excited about, the chance to line up opposite his brother, Castleford centre Peter, is perhaps the biggest factor.

“Honestly, I can’t wait. I’m not sure if anyone has seen the last few times we’ve played each other, but it’s been pretty brutal. My eldest brother and I have always been competitive and last time we went up against each other we had a little scuffle and he was into me. Even since he’s been over there he’s always said the Jungle has been the best place to play, so I can’t wait to get into the Jungle and mess things up for him.

“We come from a family of seven with a small house and not much food.

“There were plenty of arguments, which just comes with the nature of brothers; he wants to show how much older he is and I want to show him much bigger I am.

“I’ve always been close to Peter and he’s been my idol since being a young kid, but you always want to surpass your idols. There’s a little story that he’s always said I’ll be allowed to tell if I am become a better player than him!

“I remember very clearly him saying if I made my first-grade debut before he did, he would admit it. The day before my debut I asked if I was better and he wouldn’t admit it. But if you publish this, he might tell you the tale!”