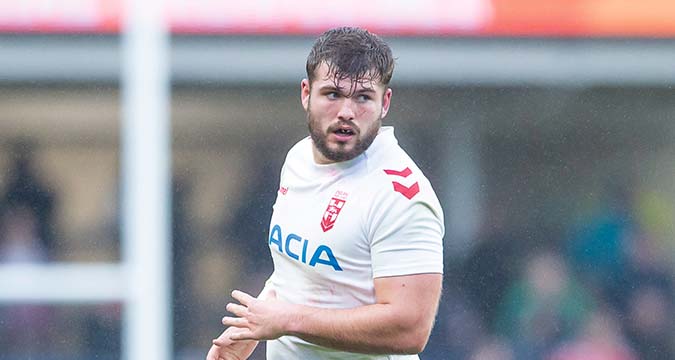 New Warrington Wolves signing Rob Butler is eyeing up a long career in primrose and blue after securing his move to the club.

The 22-year-old England Knights forward has joined the Wolves on a three-year deal from London Broncos after emerging as one of the brightest young forwards in the country.

Butler is being groomed to oversee a changing of the guard in Warrington’s front row.

Wolves captain Chris Hill turns 34 next year and is entering the final year of his contract, while Mike Cooper is approaching 33.

Butler is seen as the future of the Wolves pack, and he has every intention of leaving his mark on the club.

“I want to step up and play for one of the top teams,” he said.

“I know Warrington can perform and I want to be a part of that. My agent Dave Peet helped me to decide where I want to go. At the end of a career, everyone wants to have some silverware to show for it and I’m no different. That’s what I want and he said they fit the bill.

“I don’t know how long people are going to play for. But I’m not one to join a team and leave a team. I want to have a career here, not hop from one club to another. I’m really enthusiastic and I want to have a long and successful career with the club.

“I’m still young and nowhere near the finished article. There are a lot of people to learn from. I’m not going in thinking I’ll be the best there. But in the years to come I want to be a leader in the team and help it achieve success.”

Warrington will return for pre-season in the new year. When they do, Butler will return to action ten months after last being in a team environment.

The Championship was suspended in March and ultimately declared null and void, leaving Butler and his Broncos team-mates without the ability to train.

In comparison, the Wolves will have only had a short off-season, but Butler is confident he’ll get up to speed.

“It will be hard but that’s what pre-seasons are for. I’ve not just been sitting around doing nothing. I’m one of the fortunate ones who enjoy their job and I’m ready to get going with a pre-season.

“Going into such a big club you have to be ready. We’re in tier 3, so I have a few obstacles in my way, but if I do what I can I’m sure I’ll be fine.”