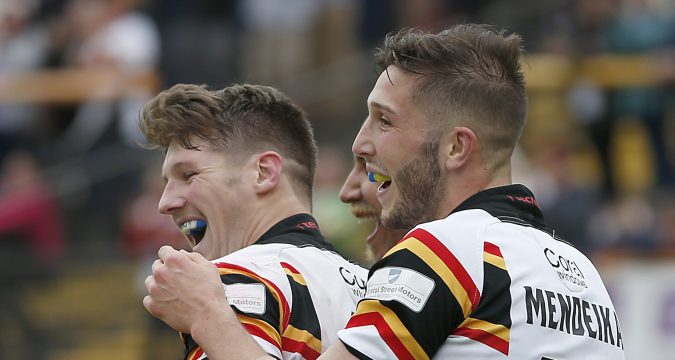 Bradford Bulls can feel confident about their 2018 season in League 1 after earning a convincing victory today over Halifax at Odsal, running out 22-6 winners with a display that will have given heart to their supporters and two tries from Elliot Minchella, one in each half.

Halifax took an early lead with a try to prop forward Frazer Morris, which was converted by Jordan Syme on his first-team debut.

It took the Bulls until the 29th minute to equalise, when Liam Kirk barged over the line for a try converted by Lee Smith.

And they took the lead soon afterwards, this time when Minchella scored the first of his two tries when he touched down a Smith grubber and Smith again converted to put the Bulls 12-6 ahead at half-time.

The Bulls moved further ahead on 56 minutes when new recruit Dalton Grant was in position to benefit from a Smith run across the field, although this time Smith couldn’t add the conversion.

The Bulls’ fourth try came when Sam Hallas came off the bench and grubbered through the Halifax defence for Minchella to touch down for his second try. With Smith now off the field, Rowan Milnes added the final conversion to secure a satisfying victory for the home fans.