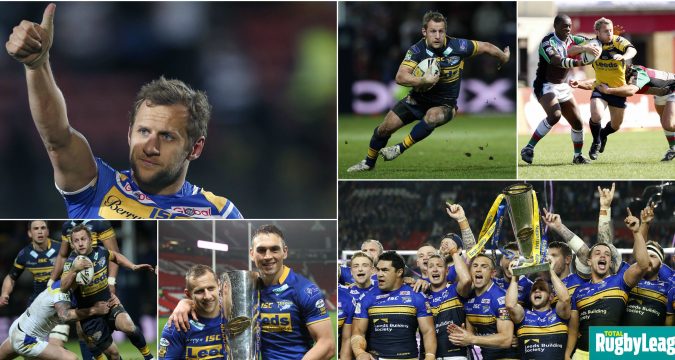 Over £160,000 had been raised for Rob Burrow in the aftermath of his Motor Neurone Disease diagnosis by late Sunday afternoon.

Tributes and messages of support from around the sporting world flooded in after the Leeds legend confirmed the devastating news on Thursday.

The Rhinos foundation set up the Rob Burrow Fund following the announcement, with over £70,000 being raised in 24 hours.

That figure is now rising towards a new target of £200,000 to help support Burrow and his young family.

Thousands more is expected to be raised as people from across the Rugby League community plan fundraising events for the coming months.

Leeds have announced that their clash with Bradford Bulls on Sunday 12th January will be a joint fundraiser in line with Jamie Jones-Buchanan’s testimonial game, with over 5,500 tickets sold in the first two days. The Bulls have donated all their ticket sales from the game to the fund.

It comes after Burrow admitted that he had been informed that a five-year life expectancy was a realistic expectation after being diagnosed with the debilitating condition.

MND, which has no known cure, affects the brain and nerves and affects a person’s ability to walk and breathe as it worsens.

But despite the diagnosis, Burrow, who is just 37, is determined to remain positive for the sake of his family.

“The worst thing for me is people pitying me,” he said.

“I know it’s going to come, but I want to be as normal as ever.

“While I am able-bodied and feel fit and strong and healthy I want to do normal things and not be treated any different. What I don’t want is pity. I think that’s the scary thing, that people feel sorry for you. I don’t want that, I just want to crack on like normal.

“I am really positive, really good considering the news. Apart from my voice and other bits and bats with my muscles, I feel absolutely normal. I am really keen to carry on as normal and just get on with life. Obviously this is a big time, with people finding out, but once it dies down I am pretty keen to just get on with life. I’ll continue coaching to the best I can, pick the kids up from school and such. I feel pretty good and really positive. I am great, considering.

“The big thing is my family. I know they will be alright after, my wife is brilliant with the kids.

“You would take anything for your family. It is me and I am happy with that. Hopefully I can fight it and if miracles do happen – there’s some trials coming out in March and I’ll try and get on them – who knows?

“I will fight it all the way. MND is the big guy and I’m the little guy, swinging, but not reaching. I will certainly swing.

“I haven’t got a goal in my head but unrealistic is ten years; realistic, I think, is five years. I’ll always remain positive, and with the support I’ve got around me, how can I not be?”

As well another Rugby League players, other leading sportsmen have also pledged their determination to support Burrow in his fight.

England cricket star Jonny Bairstow took to social media to encourage people to bid in an online auction for one of his signed playing shirts to show his support.

“It was desperately disappointing and upsetting to hear the news about Rob and his diagnosis,” said Bairstow.

“I have been a Rhinos fan for many years I watched Rob throughout his career and we spent a lot of time together at Headingley. The courage and strength he showed over such a long career is a testament to himself, his family and friends and we know he is going to fight this battle with the exact same determination.”

Next July Clare Balding will become the President of the RFL and she tweeted her support for Burrow on Saturday after viewing his interview with BBC sports presenter Tanya Arnold.

“This is so moving,” she tweeted.

“Sending Rob Burrow huge love and wishing him all the best – I know the Rugby League family will support him emotionally and practically. So too will @DoddieWeir5, who is working hard to raise money for research to find a cure for MND.”