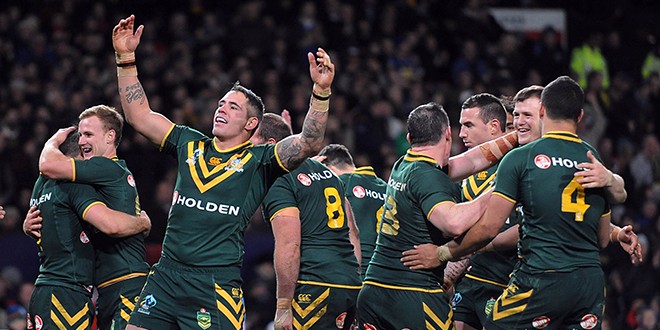 Call it killer instinct … call it whatever you like. But on Saturday the Australians showed why they are simply the best in the Greatest Game of All.

Leading 34-2 with eight minutes left to play, did they ease up? Not on your Nellie! They tackled their hearts out to prevent the Kiwis from scoring a try.

Pride in preventing their tryline being crossed for the final 404 minutes of their World Cup campaign ensured they kept up the intensity – so different to the performance of England the previous weekend. They relaxed just that fraction to be beaten in the final half-minute of their encounter with New Zealand.

It seems like ages ago that Josh Charnley was the last to score a try against the Aussies … and England actually led 10-0 earlier in that day’s action.

My British friends keep asking: “What the hell have we got to do to stop the Australian juggernaut?” I don’t have an answer.

I thought the Kiwis would make a real fist of it at Old Trafford. After all, they were battle-hardened after that cracking game at Wembley, while the Aussies had breezed through with little more than training runs against the United States and Fiji in the sudden-death matches.

But it was their attitude that counted. A desire to put the Kiwis, against whom they play week-in and week-out in the NRL, to the sword.

Sonny Bill Williams would not be allowed to slip his clever offloads to team-mates. Issac Luke was not going to run at will. The creativity of halves Shaun Johnson and Keiran Foran was to be snuffed out. And any fearsome display by the big New Zealand pack was to be kept to the pre-game haka.

Australia may have scored five tries to nil. But it was their defence for 80 minutes – and not just 79 ½ – that really won them the game. Sadly, we didn’t see it on Saturday.

Of course, in the lead-up to final the IRLF shot itself in the foot once again.
After failing in their bid a few years ago to steal the Golden Boot, they announced their annual awards, including International Player of the Year (Sonny Bill Williams) and Team of the Year before the final. They conveniently failed to tell the general public that the awards only covered 10 months of the year, with the cut-off date being the NRL and Super League Grand Finals.

Surely, in a World Cup year, the game’s greatest prize should be the major consideration in any poll.

Sonny Bill had a fine year – but was kept quiet in the final by some wonderful defence, especially from Greg Inglis (the fellow The Guardian newspaper subeditors called Simon Inglis).

Kiwi TV commentator Daryl Halligan summed it up so well: “He [Sonny Bill] tried so hard but nothing has gone his way.”

The RLIF Stand-off of the Year was Man of Steel and Albert Goldthorpe Medal winner Danny Brough. Yet, in the final, Johnathan Thurston took out his fourth Man of the Match award, a World Cup record.

Billy Slater, miraculously overcoming injury, showed why he is still the best fullback in the world, although I rather fancy, as age catches up with Billy the Kid, that Sam Tomkins is ready to assume his mantle.

And as for Coach of the Year, one could hardly go past Tim Sheens, especially after his master-stroke in switching Jarryd Hayne to the centres.

It was well worth waiting up until 3.30am Sydney time to watch the World Cup final.
And, for this writer at least, the 2014 Four Nations Tournament can’t come around quick enough!