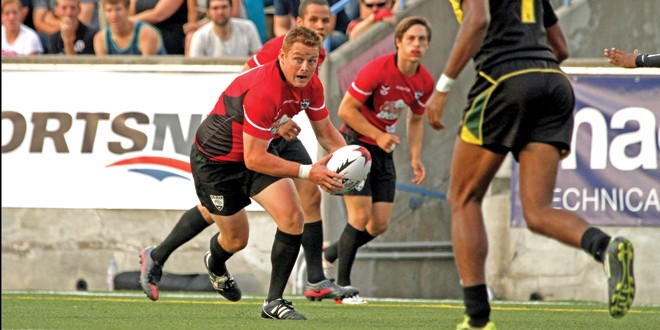 Canada RL board member Paul O’Keefe highlights some Wolverines squad players to look out for, as they prepare for the Firehouse Subs 2017 World Cup Qualifiers – Americas, due to start in Florida on 4 December.

“Enoch ‘The Warrior’ Wamalwa is always a crowd favourite due to his bullocking runs,” O’Keefe says of his first selection. “He has been a mainstay on the Wolverines team since Canada’s International re-emergence against USA in 2010 and continues to grow as a player with every game he plays.

“Matt Wyles is Canada’s most capped player having played in all 20 internationals since 2010. He leads the team with his tenacious play and has a fine set of skills, which was exemplified by his magical tunnel-ball pass that led to an important try on the stroke of half time in game one of the Colonial Cup this year. Matt is an experienced campaigner who can turn the game at a blink of the eye.”

Another colourful character is Steve Bouchard. O’Keefe notes: “Nicknamed ‘The Beast’ he’s a tough, athletic forward with an American Football background. He is a part of the BC Bulldogs Development Programme and has played for both the Bayside Sharks and Valley Warriors in the BCRL Domestic Championship. Steve will make his international debut at RLWC Qualifiers and has a big representative future ahead of him.

“Jamie Kelly, is known as ‘The Sherriff’ and is the epitome of the hard-nosed, aggressive, ball carrying Canadian rugby league forward. Playing either prop or back row, he has an incredible work rate to go with his uncompromising style and ultra-competitive attitude. He has been the consistent, top performer in the BC Bulldogs representative team since its inception in 2012.”

Adam Timler impressed new coach Aaron Zimmerle at the 2014 Cabramatta International 9s, finishing as top try scorer. O’Keefe believes: “He has the X factor to put his mark on any game. Adam is a proven 9s player and ‘The Tornado’ is looking to leave his mark in Florida with his exciting blend of balanced running, strong support play and solid defence.

“Tom Dempsey is a heritage player who is travelling from Queensland for the Qualifiers. He can be relied upon for a tough carry and plenty of work in defence. He also possess a nice pass for a big man.”

Unusually, the Wolverines have two sets of brothers selected in their train-on squad.

“Rhys Jacks is a scheming Souths Logan halfback in the Queensland Intrust Cup. He is an organizer who creates opportunities for his runners and is solid in defence. Ryley Jacks has recently signed for Melbourne Storm feeder club Sunshine Coast, a halfback who possesses a good all round game and is looking forward to representing Canada,” O’Keefe confirms.

“Michael Cregg is a clever hooker who adds a spark, he is known for his quick scoots from dummy half while Jonathan Cregg is a strong running back who is always dangerous. A great tackler, he is a talented player who loves a try.”