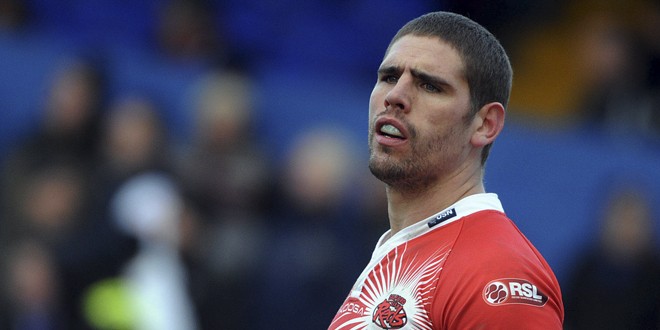 Castleford Tigers have confirmed the signing of Lee Jewitt on a deal until the end of the 2014 season, subject to clearance from the French Rugby Federation.

The prop will add further strength and depth to the Tigers squad at a time when injuries have depleted the forwards department.

The 27-year-old started his career at Wigan Warriors for whom he made his debut in 2005 before moving to Salford in 2007. He played over 100 Super League and Challenge Cup games for the Red Devils but was released at the end of last season.

Jewitt has spent the last six months playing in the French Elite Championship with Limoux and is now looking forward to a return to the First Utility Super League with the Tigers.

“It’s gone really well and it’s been an eye opener,” Jewitt said. “Super League is the elite and you come to France and it’s a different level completely.

“The Elite Championship is their top division and it’s probably on par or a little bit of a better standard to our Championship.

“The release from Salford was a blessing in disguise – I’ve learnt a lot about myself out here away from Super League. Playing Super League week in, week out is the best life ever, but I was at Salford for a long time so it’s refreshed me to get out of that environment and try something new.

“It’s been a good life experience and it’s been good for my wife and children.”

With the Tigers having started 2014 in fine form, Jewitt is looking forward to joining a team on the up and prove his credentials for a longer stay at The Mend-A-Hose Jungle.

“I’ve been watching them from over here and they’re looking really sharp; I just can’t wait to get out there and give it a go.

“I think I’m going to thrive on the high standards that have been set. There’s competition for places and that’s always good as it brings out the best in players.

“Cas are second in the Super League table and are known as a big club, alongside the same clubs that people say every year – Wigan, St Helens, Warrington – it’s nice to be up there with them and beating them.

“I can’t wait to get in there and work under Daryl Powell and show what I can do. I’ve got the rest of this year and I’ll knuckle down and if I impress then I could get a longer deal. I’m pretty confident that I’ll get it because I’m coming here to play and work hard.

“When I spoke to Daryl the other day he said he can’t wait for me to get in there and start work and it’s the same on my part. I can’t wait to get in my feet under the table and start going.”

Powell said: “I am delighted that we have been able to secure the services of Lee, a player who I tried to sign at the end of last season.

“He’s a tough and uncompromising player who will add strength and depth to our forward pack at a crucial time of the season.”

Jewitt will arrive in the UK on Tuesday and take part in his first training session with the Tigers on Wednesday.