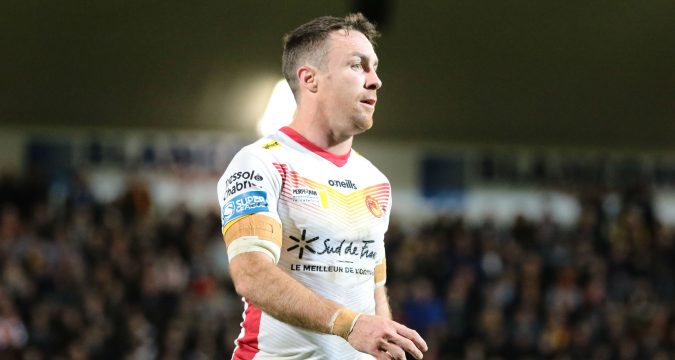 The eyes of the world will be on Super League this weekend when the competition restarts in front of potentially the biggest television audience the game has ever had.

Champions St Helens will take on Catalans Dragons behind closed doors at Headingley in the opening fixture on Sunday. And while there may be no supporters in the ground, the match will be televised live across the UK and will be free-to-view in France for the first time.

“We have a huge responsibility to make sure we get it right,” said Dragons coach Steve McNamara, conscious of the potential impact to be made following Catalans’ new television deal with French sports channel L’Equipe, who will broadcast the club’s opening fixtures.

“It’s a massive breakthrough for our club and the game as a whole,” McNamara told League Express, adding: “We’ll be live on a national channel being shown all over France with potentially huge audiences. It’s crucial that we get the product right on the field and make it look good, which I’m sure both sets of players will do. And if that comes across on national TV we could see some major new opportunities for the game.

“Our opening four games of the restarted season will be available free to viewers in every corner of the country for the first time ever. So we have a responsibility to make sure those potential new supporters enjoy what they see.

“We’ve had some cracking games against Saints, some real tough battles and we look forward to another one. We’re all set to put on a great spectacle.”

McNamara is conscious that Super League is in the shop window like never before and he hopes both teams cope with the unique conditions and new rules.

He said, “It’s been a long time since we played and there’s an element of going into the unknown, which is exciting and challenging and we’re all looking forward to it.

“We’ve done our best to prepare for the new rules and we’ve taken advice from down under. We’ve all done a bit of digging around; as coaches we speak to our colleagues in the NRL on a regular basis.

“Funnily enough, James Graham will be the only player in Super League who has had experience of the six-again rule and playing in neutral grounds behind closed doors. He’s done it in the NRL so he knows what it’s like.

“It’s great for Saints and great for the competition to have him back for the rest of this season.”

In other news from Perpignan, McNamara said Catalans club officials had been disappointed by the decision to remove Toronto Wolfpack from the remaining Super League season.

“Toronto would have been the first of our home games after five away fixtures and the club was really looking forward to it,” he said.

“We were planning to promote the Sonny Bill Williams v Israel Folau aspect, which would have been attractive to rugby union supporters in France.

“We’d built it up to be a really big game for our club so to lose that is disappointing. But of course we have to think of the situation the Toronto players and staff are in at the moment. There’s a lot been said about the situation and questions raised but there is a human side of this. There are people there who are going to struggle to make ends meet now and we’ve got every sympathy for their predicament.

“The decision has thrown the new fixture list into a bit of disarray, but it looks like the Toronto fixtures will remain blank weekends for us. With the Challenge Cup games still to be decided and the number of catch-up games we have to play it gives us an opportunity to spread some of the games out.

“We’ve got a really tough schedule ahead, so losing a couple of fixtures won’t do us any harm on the pitch.”

McNamara said Toronto’s difficulties made him even more proud of the efforts being made in France to develop and expand Rugby League beyond traditional boundaries.

He said, “It’s not that it’s any easier here, in some ways it’s even more difficult, but it seems that the owners of Catalans Dragons and Toulouse Olympique have looked at the situation the game has found itself in this year and tried to address it positively rather than seeking out all the negatives.

“It’s sometimes in the nature of the game in England that we moan a lot that we’re a small game and then when we aim to be a bigger game we moan about that as well. Everyone is entitled to their own view, but from this side of the English Channel the noises are pretty positive.

“Toulouse are working hard on their ambitions to get into Super League and we are driving hard to compete at the top end of the game consistently.

“And our work starts again at Headingley on Sunday.”