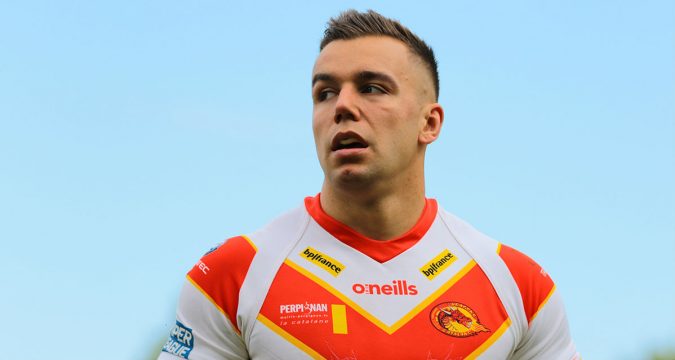 Mickael Goudemand has got a head start in the race to be Man of Steel in 2020 after replacing one of his fingers with a metal digit.

The 23-year-old Catalans Dragons forward saw last season ruined by a niggling injury to his right hand, which was sustained during a match against London Broncos in May. Two operations to repair the damage were unsuccessful and now he has had the main joint of his ring finger removed and replaced with a titanium prosthetic.

“Fingers-crossed, that should be an end to it,” Goudemand said with a wry smile.

“It has been the most frustrating time of my life, it ruined last season for me. It was getting to the point where I was going to ask Mr Guasch (club president Bernard, who owns a meat processing business) to chop it off.”

The French international admitted the past eight months had been “a nightmare.” He told League Express: “I first did the injury in May, it was a complete dislocation and I had an operation to put it back together but I was too keen to play and I returned too soon and it went again.

“I had a second operation where they put pins in it to support the joint. But that didn’t work and then it gave way early in pre-season, so I had to have major surgery where they replaced the joint with a titanium one.

“They have assured me that this will be the end of it and I certainly hope so. It’s been one of those stupid, niggling injuries which doesn’t seem serious but causes so much pain and annoyance.

“It came at the worst time too, because everything was going so well, I was happy with my form, I had been getting regular first-team experience and the club gave me a new contract and then this happened. It has been driving me crazy.”

Goudemand’s star had been rising rapidly following his debut for the Dragons in 2018. Quickly selected for the national team, the promising youngster was being tipped as the new flame for French Rugby League as a serious of powerful performances helped propel the Dragons to Wembley and historic Challenge Cup glory.

Last season started on the same trajectory until the finger gave way during an innocuous tackle and the past eight months have been the most painful of his career.

He said: “I want to be my best and play to my full potential, but every time I caught the ball or went into a tackle I could feel this severe pain and it puts you off your game. For just a finger I’ve missed half a year of my career and it’s incredibly frustrating.

“My first two operations weren’t successful but now I have a prosthetic joint. I’ve got a brand new finger made of steel and it’s only a week after the operation but already it feels better.

“I’m seeing the surgeon next week and hoping to have the dressing removed so I can start to move the new joint. I should be ready to play in Round Four. I will have to wear some protection early on, but if all goes well it should be as good as new, if not better.”

Join in the debate on the Fans Forum