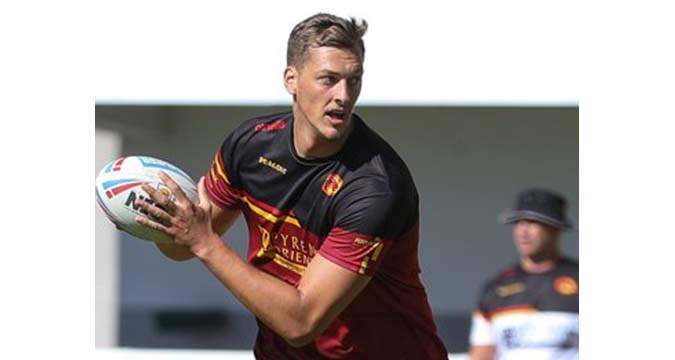 The rejuvenation of an ageing pack at Catalans Dragons is a tall order, but coach Steve McNamara has made the best possible start by promoting the game’s tallest-ever player.

The recent departure of seven senior first-teamers from Stade Gilbert Brutus has created room for younger French players in the squad and one of those positions has been taken up by 21-year-old Corentin Le Cam who, at six-foot NINE, is reputedly the tallest professional Rugby League player in history.

McNamara said: “We gave Corentin a full-time contract in June and although he hasn’t played first-grade yet because of last year’s shortened season, he will be knocking on the door next term.

“His size is a real asset, but it also represents a challenge to a coach because he is so physically different to everyone else on the pitch. But he’s got a great Rugby League brain and comes from a rich pedigree in the game through his family. He’s a great kid.”

The responsibility for developing younger players at the club is now in the hands of former Dragons’ record-breaking try-scoring winger Justin Murphy, who has taken over as coach of the club’s reserve team St Estève XIII Catalan.

The 42-year-old Australian scored 54 tries in 66 games during a dazzling three-season stint in Perpignan from 2006-08. After returning to Australia, he came back to France last year to take up the coaching reins at Toulon Metropole in the Elite Two division and now the Dragons’ reserves in Elite One.

Murphy told League Express: “The Catalans cub has always remained close to me, it’s in my heart, I spent some good times here and I’ve always wanted to come back and give something back to the younger generation.”

Murphy is assisted in his new role by fellow Aussie and former Dragon Greg Bird.

“Birdy’s been great,” said Murphy, adding: “He’s recently been playing the game and with his experience of Rugby League at the very top he’s really good for the kids. He’s played for New South Wales in Origin and he’s played in World Cups, so to have someone like that for young players to learn from is really good.”

The Dragons abandoned their Academy team two years ago and decided to incorporate their teenage talent into the reserves, making St Estève XIII Catalan the youngest side in the French Elite One division. As current champions, it’s fair to say that the squad contains the nucleus of future French talent in Rugby League.

Murphy said, “The talent is there, but it needs to be identified and nurtured within the right system.

“We’ve got a young guy here from Limoux, he’s just turned 19 and he’s already spent some time at Melbourne Storm. His name’s César Rougé, he’s a halfback and he’s tough, he’s got the skills and he’s a great defender but the best thing about him is he is coachable.

“He wants to learn and he listens; you don’t have to tell him things twice, he’s a quick learner. We’ve got some really good young forwards too who are in great shape, they just need to learn the mental side of the game.

“To play against quality opposition is important for us and there is lots of experience in Elite One. Some teams have packs made up almost entirely of ex Super League or NRL players, so for our young guys it is a massive challenge, but it’s a great opportunity.”

Murphy said there have been big changes since he last strode out at the Brutus, adding: “The club is really different from when I first arrived. They are so professional now in everything that they do. The French players have now had the benefit over the years of knowing what it takes to play at that level.

“When I first started the French boys hadn’t much experience of what it takes to be a professional Rugby League player.

“At that time some of the French players combined playing with a job outside of the game, but everything is ultra-professional now, from the head coach Steve McNamara right down to the reserves and juniors.

“I’d never met Steve before, but I was obviously aware of his career in the UK and down under as a club and international coach. When I first met him recently he really impressed me with his vision of what he wants to do here.

“There are still some familiar faces at the club, Alex Chan, the general manager, he’s there keeping people in line and making sure people don’t get ahead of themselves.

“He’s a very important figure at the Brutus. He’s got the passion, he understands where the club has come from and he’s installing some of the values he had as a player into the younger faces at the club. I’ve always kept in contact with Alex; it was good to have him on the field and it’s good to have him on the staff now.”
Murphy’s also on the staff now and his role is clear: “Our main aim is to turn these young French kids into quality Super League players.

“This region of France is a Rugby League heartland and it’s important that the Catalans club goes out there, finds the players, and develops them. Hopefully we can find some from the other regions of France too, because around Avignon and Marseille there are some really good players.

“I enjoy looking for the young people and emerging talent and give them the opportunities. It’s up to them to see how they handle it.”