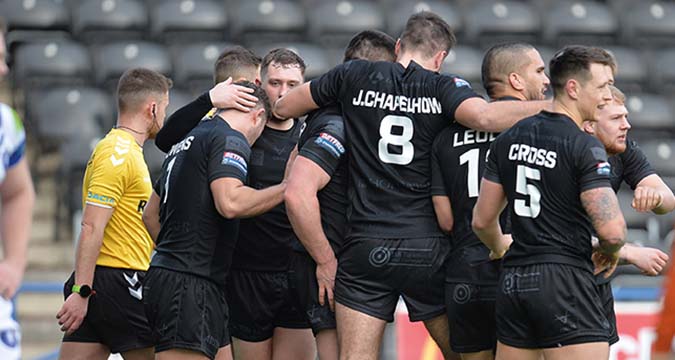 Widnes are desperate for a return to Wembley in the revived 1895 Cup, says their skipper Jack Owens.

The AB Sundecks-sponsored tournament for non-Super League clubs is back on the agenda, albeit on a slimmed-down scale, after being a casualty of the coronavirus lockdown last year.

While the inaugural 2019 version featured 20 teams and was won by Sheffield Eagles, this season’s will be made up of just four teams because of a compacted fixture list in the Championship and League 1.

Qualification was by winning in the second round of the Challenge Cup, with Widnes joined by Featherstone, Swinton and York. The draw will be made after the Challenge Cup fourth round is completed on the weekend of May 8/9.

The semi-finals will be played on the weekend of June 5/6, although if any of the four clubs reach the Challenge Cup semi-finals, which are also due to be played on that weekend, then their 1895 Cup game will be rearranged.

And the final will be staged as part of a national-stadium double-header with the Challenge Cup showpiece on Saturday, July 17.

“It’s exciting to be within one win of Wembley,” said fullback Owens, who played there for Widnes when Sheffield won 36-18 two years ago. Owens scored 14 of his side’s points in the 34-10 home win over Whitehaven in the second round of the Challenge Cup.

“It was a great experience, and we want to do it again, although with the other sides in the competition, we know we’ll have to pick up our performance levels.”

While Widnes have been to Wembley 14 times, the other 13 in Challenge Cup finals, seven of which they won, Featherstone made the last of their five visits in the 1983 Challenge Cup Final, in which they beat Hull 14-12.

York’s sole Wembley trip was for the 1931 Challenge Cup Final, which Halifax won 22-8, while Swinton have never played there.