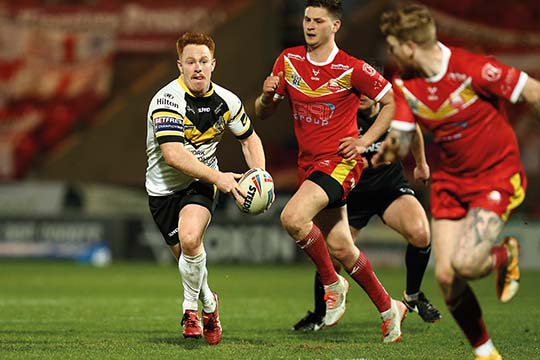 York City Knights halfback Brendan O’Hagan wants to play for Ireland and its out to win a spot in this year’s World Cup.

O’Hagan hails from Australia, from the NSW Central Coast, and joined York in the off-season from Wests Tigers.

The playmaker has represented NSW at Under-16, Under-18 and Under-20 level but is eligible for the Wolfhounds through his grandparents.

“Both my grandfathers are Irish, so there’s a bit of Irish in me,” he said.

O’Hagan has impressed for the Knights in the Challenge Cup and is keen to press his claims for an Ireland call-up.

“Coming here will give me some more exposure and I’ll be closer to Ireland and to the Irishmen in the system here. It’s a massive goal of mine; I’ve always wanted to play for Ireland. Hopefully I’ll get the chance. It would be amazing to play in my first World Cup for Ireland.”

Ireland have strength in depth in the forwards, with a number of Super League players eligible, but they are not blessed with the same options in the halves.

Apart from Hull KR scrum-half Joe Keyes, the Irish do not have another experienced playmaker to call on.

Former captain and halfback Liam Finn has retired, while fellow playmaker Scott Grix is 37 years old and unlikely to feature for the Wolfhounds at the World Cup.