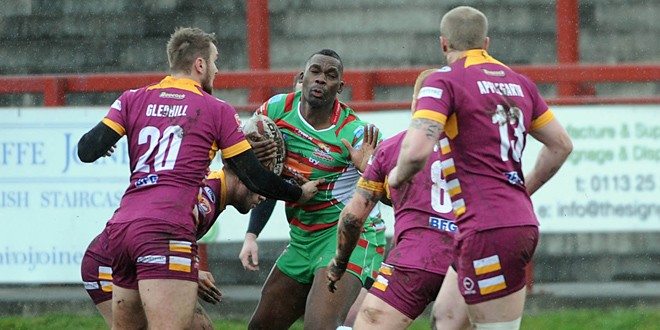 Sunday 2.00pm at the Love Rugby League Stadium
Batley Bulldogs fullback Miles Greenwood is on the verge of his 100th career try.

Greenwood has 98 tries to his name, 24 in Batley colours. He has previously played with Widnes Vikings, Leigh Centurions, Halifax and Oldham.

The Bulldogs will have loan pair Kyle Trout and Alex Brown available after the duo were forced to sit out last week’s Tetley’s Challenge Cup clash with Castleford Tigers.

“We did a great deal of tackling (against Castleford), so it’s a matter of nursing us through and re-energizing the lads for Keighley,” said Bulldogs coach John Kear.

“Our attitude wasn’t where it should have been last week; our mentality wasn’t right and defensively we weren’t right,” said Keighley coach Paul March.

“We’ve got to defend our own line much better and stop piggy-backing teams down the field. If we don’t improve for this week’s match, we’ll get punished.”

One man hoping to punish Batley is Cougars halfback Danny Jones. He needs seven goals to reach 500 for his career (field goals excluded).

He kicked 132 in two spells with Halifax, 358 in Keighley Cougars and has booted three goals for Wales.