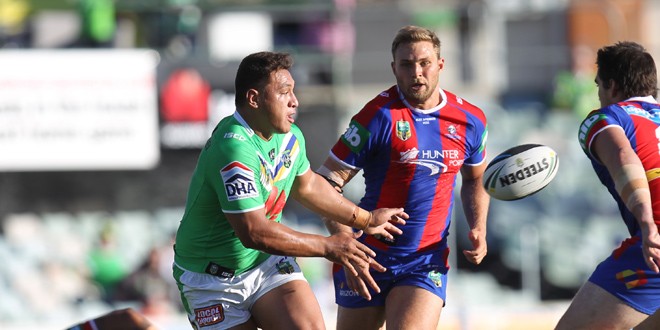 In a nutshell
Canberra again failed to win at home as the Knights pulled away in the second half to secure a comfortable victory.

How it unfolded
The first half saw the sides go into the sheds level at 12-all.

The Raiders had opened the scoring with a try by Jarrod Croker, which he also converted, after eight minutes.

But the Knights replied when Scottish international James McManus was on the end of a brilliant passing movement, with Tyrone Roberts adding the conversion from the touchline.

Croker had a second try disallowed before Adam Clydesdale forced his way over from dumm-half for the Knights, but the Raiders got back on level terms when Shannon Boyd touched down after 35 minutes.

In the second half the Knights gradually pulled ahead through tries by Beau Scott and Dane Gagai, both converted by Roberts, with the halfback also landing a penalty to seal a much-needed victory for Wayne Bennett’s team.

A full review of all the weekend’s NRL matches will feature in Monday’s edition of Rugby League Express, available in the shops and online from 11.00pm on Sunday evening UK time.