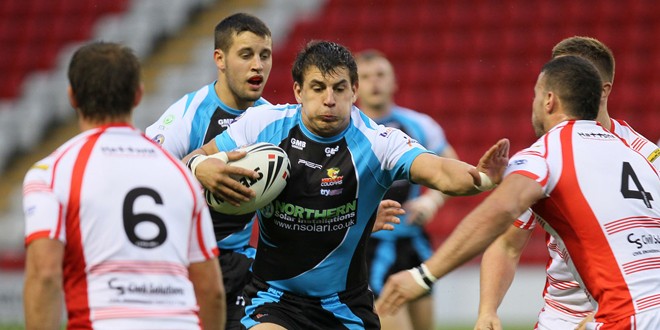 Sunday 3.00pm at Cougar Park
Keighley Cougars will be looking to stop the Centurions from scoring over 50 points for the fourth consecutive game this season. The Centurions have scored 52 points in each of their three wins in the Kingstone Press Championship, while halfback Ryan Brierley is looking to add to his tally of eleven tries scored in the opening three games.
Brierley is in sight of equalling Warrington winger Brian Bevan’s achievement of scoring an hat-trick in four consecutive games – a feat the Australian did twice.
Halfback partner Martyn Ridyard is looking to continue his run of scoring in Leigh’s last 17 matches, he has amassed 38 points this term and is second in the point-scoring chart to Brierley who leads the way with 52 points.

Leigh’s Martyn Ridyard has the longest scoring streak in the game, having registered points in the Centurions’ last 17 matches. His run of consecutive scoring appearances began with five goals in a 42-20 home win against York on 23 June, 2013.

Keighley Cougars player-coach Paul March is suspended for Sunday’s match against Leigh Centurions, but will otherwise pick from the same squad as last week.

March said: “Everybody came through OK against Rochdale, which is good news.”

He added: “On paper, Leigh have probably got the strongest squad in the Kingstone Press Championship.

“It’s a massive challenge for us, but we’ll go in as underdogs and you’re always dangerous when you’ve got that tag.”

The Centurions are aiming to maintain their perfect start to the season with a fourth win in four matches.

Coach Paul Rowley said: “We’re happy with what we’ve done so far, but we’ve also been pretty critical of ourselves at training this week. We really do need to improve in some areas.

“Keighley are a well-rounded team, they’ve started pretty well and they’ve not got many chinks in their armour.

“They scored some fantastic tries last week and I was really impressed with their go-forward, particularly from Jodie Sheriffe.”

Leigh have no new injury concerns to contend with ahead of the trip to Cougar Park.